Put A (Pickled) Bird On It! 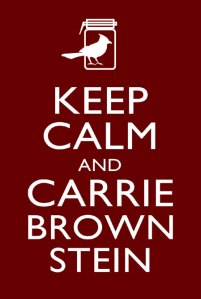 I don’t really understand how or why these “Keep Calm…” parodies became so prevalent (even my mother has a cooler bag emblazoned with “Keep Cool And Carry”), and some of the wordplay can be pretty painful to read… but I had this idea for a pun on Carrie Brownstein’s name, and I’m desperately trying to avoid my proof-reading duties, so I thought I’d knock it up and put it out there. (Note: The bird and pickling jar are a reference to a recurring sketch character of hers on Portlandia).

Boring fact: I dithered over hyphenating “Brown-stein” for a fair few minutes, before deciding against it, and going with the version you see here… but I’m still not convinced it was the right decision. It seems disrespectful to split her name up like that… but the hyphen looked weird, hanging there at the end of the line… gah! I’m glad I don’t design stuff for a living… details like that would drive me insane…

2 Responses to Put A (Pickled) Bird On It!