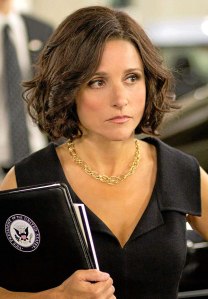 Although frequently hilarious, there was something slightly dispiriting about the first season of Veep, which (much like its British forebear, The Thick Of It) left me feeling slightly empty and depressed once the laughter had died down. Strangely, that wasn’t the case with the second season, which ended on a substantial cliff-hanger this week, though I can’t pinpoint any major changes in the content or style of the show itself. The petty politicos are still as gaff-prone and tactless as ever, greeting colleagues and rivals alike with a barrage of eloquent abuse… yet somehow it was a lot easier to care about the characters this time around, and enjoy their antics without the bitter aftertaste. As in a previous comment about Seinfeld, I’d attribute this to the natural charm and likeability of the cast seeping through, making potential caricatures seem more sympathetic and human, as they warm to their roles and we grow more attached to them in turn.

Either way, Julia Louis-Dreyfus acted her ass off this season, in the wake of her well-earned Emmy win for Outstanding Lead Actress… and if she doesn’t win again this year, then I declare the whole ceremony a sham. Her adorably addled, St-John’s-Wort-fuelled bliss-out in ep #2.9 alone should be enough to earn her the award, imho. Laughing while peeing off-camera FTW! Meanwhile, Anna Chlumsky deserves an honourable mention for her hilarious reaction shots throughout the series. I’d never really paid much attention to her before In The Loop, but the outraged/enraged faces she pulls here are a joy to behold. 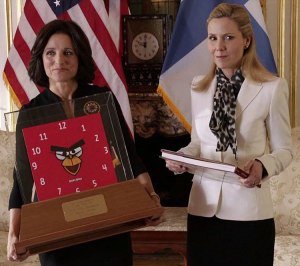 As for guest actresses, this season saw the super-cute Sally Phillips cameo as ‘Mina Houkenen’, the bemused Prime Minister of Finland who Selina attempts to schmooze during an official visit. Apparently half of the “Finnish” she was speaking was total gibberish, but she sold it well, and it was such a thrill to see two of my long-time comedy crushes sharing a screen together! Then, in ep #2.8 Selina found herself being ambushed with gotcha-questions, during a supposedly “softball” TV interview, by her old friend ‘Janet Ryland’, played by the inestimable Allison Janney. Again, seeing these two old pros play off of each other was a real treat… though sadly, Janney didn’t do “The Jackal” to celebrate her coup. Boo!

[On the other side of the gender divide, I’ve gotta give a shout-out to Timothy C. Simons, who plays the irrepressibly effusive ‘Jonah Ryan’, aka “Jonad”. Nerd-herd, assemble!]

A comic book writer with an interest in feminism, philosophy, and affirmative action.
View all posts by Dee CrowSeer →
This entry was posted in Rants about TV and tagged Allison Janney, Anna Chlumsky, Julia Louis-Dreyfus, Sally Phillips, Veep. Bookmark the permalink.
%d bloggers like this: