Watching Season Eight of Seinfeld so soon after Season Five was a slightly jarring experience… and not just because of where the characters’ lives were at, relative to where they were when I last saw them. S8 was the first season produced after Larry David’s departure as co-showrunner, and there’s a definite loosening of the show’s reality level… at times it almost plays like a cartoon spin-off of the original series (albeit a live-action cartoon spin-off)! The most egregious example of this “loosening” had to be the way Elaine suddenly found herself in charge of the Peterman catalogue empire, when its eponymous founder suddenly decided to go crazy and run away to Burma (aka Myanmar). The scene where Elaine tracks her erstwhile boss down again (just to get him to sign-off on an expenses claim), only to be dragged into an extended Apocalypse Now parody, may well be the nadir of the entire series for me. That said, there were a lot of classics episodes in this run, including ep #8.19 (“The Yada Yada”), which features my all-time favourite Lainey line… “No, I mentioned the bisque”. Love Julia Louis-Dreyfus’s delivery on that! It was also a lot of fun seeing her playing dumb in ep #8.9 (“The Abstinence”), when a lack of sex starts making her brain not work good… and scuppering her own chances of joining a more sensitive and supportive group of friends in ep #8.3 (“The Bizarro Jerry”) by shoving them around too hard!

Meanwhile, there was an embarrassment of riches, as far as female guest-stars go, so let’s crack on with the laundry list:

Ep #8.1 (“The Foundation”) featured a cameo by Janeane Garofalo as Jerry’s former fiancée ‘Jeannie’… but it was just a quick flashback to write her out of the series, rather than a full-fledged scene. Presumably she was introduced towards the end of Season Seven, but that’s the one boxset I don’t own at this point… so I’d better hurry up and buy it sometime! Lauren Bowles also appeared in this ep, in the minor recurring role of a smokin’ hot ‘Waitress’ at Monk’s . Apparently she’s a half-sister to JLD, and cropped up in both of the actresses’ subsequent star-vehicles (The New Adventures of Old Christine and Watching Ellie), but is probably best known now for playing ‘Holly Cleary’, the smokin’ hot Wiccan waitress in True Blood. Speaking of which, Kristin Bauer van Straten appeared in ep #8.3, as ‘Gillian’, a gorgeous date of Jerry’s, who happens to have “man hands”. And, spookily enough, ep #8.4 (“The Little Kicks”) featured Rebecca McFarland as ‘Anna’, an employee of Elaine’s, who only starts to take an interest in George, after her boss warns her off him! I say “spooky”, because last week McFarland dropped in to the latest season of TB, as ‘Maggie Devins’, the baby-momma of Terry’s recently deceased Army buddy.

A.J. Langer appeared in ep #8.5 (“The Fatigues”), as ‘Abby’, a super-cute girl Jerry is dating, who has an older woman mentoring her. Fun fact: In 2004 Langer married Charles Courtenay, the son of the Earl of Devon, and now holds the courtesy title of “Lady Courtenay”… but I’ll always think of her as ‘Rayanne Graff’ on My So-Called Life, singing a sexed-up version of the Sesame Street theme song. Bless her. Andrea Bendewald appeared in ep #8.11 (“The Little Jerry”) as ‘Celia’, a convicted fraudster working in the library of a women’s prison, who George falls for on a random charity visit. For me, the most interesting item on Bendewald’s resume was her role as ‘Maddy Piper’, an investigative reporter and frenemy of the title character, in the Brooke Shields sitcom Suddenly Susan (a show I remember fondly for introducing me to Kathy Griffin… but, sadly, it isn’t available to revisit on DVD at this time). The biggest thrill for me, guest-star-wise, came in ep #8.12 (“The Money”), with Sarah Silverman’s cameo as ‘Emily’, a girl Kramer is dating, who keeps disturbing his post-coital sleep with her restless “jimmy legs”. Frankly, I’m more than happy to endure a few sleepless nights, and take a few bumps and bruises, if that’s the price you have to pay for sharing a bed with Big S! Sadly, she doesn’t get to unleash any of her trademark crazy genius here… so I’m glad she eventually graduated out of playing “the girlfriend roles”. This isn’t a duet, sweetie!

Ivana Milicevic (aka “Ivana Milavich”) made her TV debut in ep #8.13 (“The Comeback”), as ‘Patty’, the dutiful wife of a fraudulent tennis pro, who offers to sleep with an unsuspecting Jerry, in order to protect her husband’s reputation. She gets to play quite a fun faux-dramatic beat, when she breaks down in tears and reveals her true identity to Jerry… and she also puts on a slight Slavic accent for the role, which is always music to my ears. Christine Taylor appeared in ep #8.14 (“The Van Buren Boys”), as ‘Ellen’, a seemingly perfect girl Jerry is dating, who’s pitied by her gal-pals for no discernible reason. Funny to think that she was on the same show as her future father-in-law, Jerry Stiller, two years before she eventually met (and married) his son, Ben! Kristin Davis appeared in ep #8.15 (“The Pothole”), as ‘Jenna’, a girlfriend of Jerry’s, whose toothbrush he accidentally knocks into the toilet. Ew! And Debra Messing returned in ep #8.19 as ‘Beth Lukner’, a young married woman Jerry is obsessed with. This was roughly a year before they both scored their major breakout roles (in Sex and the City and Will & Grace, respectively), but they’re both very recognisable as the sitcom stars we know and love today! 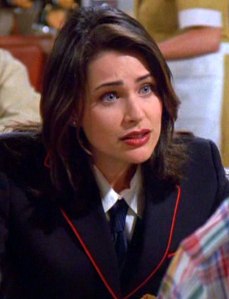 Rena Sofer appeared in ep #8.21 (“The Muffin Tops”), as ‘Mary Anne’, a guide with the New York Visitor’s Center, who befriends George after mistaking him for a rube. Apparently Sofer’s late casting as ‘Vicky Costa’ in Just Shoot Me! proved controversial with American viewers, and she was unceremoniously written out of the show before the series finale… but I think she’s a very funny actress, and would made a great addition to any ensemble, dammit! Melinda Clarke appeared in the same ep as ‘Alex’, a date of Jerry’s whose fondness for hairless dogs reassures him after he has a chest-shaving mishap. Besides a recurring role in the new Nikita series, Clarke has played a brothel madam in Firefly, an Amazonian antagonist in Xena: Warrior Princess (her character, ‘Velasca’, only appeared in two episodes, but proved so popular with the fans that she got her own action figure!), and also voiced the lead character in “Matriculated”, Peter Chung’s brilliantly mind-bending contribution to The Animatrix. Finally, Raquel Welch appeared as a violent version of “herself’ in ep #8.22 (“The Summer of George”), while Molly Shannon played ‘Sam’, a co-worker of Elaine’s who walks without moving her arms (as if “she’s carrying invisible suitcases”), and Amanda Peet played a waitress named ‘Lanette’, who agrees to be Jerry’s date for the Tony Awards, despite living with a “dude” who may-or-may-not be her boyfriend. Tch!