Last Saturday, BBC2 were showing In the Loop (2009), so I thought it might be fun to watch it again, to see how it compared to writer/director Armando Iannucci’s subsequent HBO sitcom Veep.

In truth, aside from his signature style of sweary, semi-improvised political satire, they’re actually very different animals. The only obvious duplication, character and casting wise*, is Anna Chlumsky as ‘Liza Weld’, the ambitious assistant to a senior female politico, whose con-heavy paper on the consequences of launching an impulsive invasion of Iraq draws her into the (metaphorical) crossfire between the Hawks and Doves in D.C. Aside from a few great quips and put-downs, she also gets to pull some of her trademark funny faces… my favourite being her look of confused, cordial terror when James Gandolfini’s ‘Lieutenant General Miller’ waves at her through a transparent office wall while taking a meeting with her boss.

Speaking of whom, U.S. Assistant Secretary of State for Diplomacy ‘Karen Clark’, is played by the mighty Mimi Kennedy (aka Dharma’s Mom!), and may well be one of the most honourable and honest characters to ever appear in the Iannucci-verse! Right from the get-go she lays out her opposition to the invasion, and tries her best to avert it through the official channels open to her… and when her peace-keeping efforts fail, she decisively tenders her (unsolicited) resignation. No back-stabbing or back-pedalling, no game playing, no fudging the facts, no weasel words… 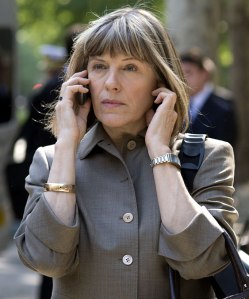 just straight-up, undiluted integrity and idealism. Bless her. Since many of the scenes were improvised, I’d assume that Clark’s integrity was influenced by Kennedy’s own off-screen activism… and she plays the part beautifully, wringing laughs from her character’s heart-breaking earnestness, even when she’s bleeding from the gums! “I’m not a monster, Liza!” [While trawling for images, I found a short and sweet interview (at a blog called Three Imaginary Girls), in which Kennedy and Chlumsky discuss the filming process, and their onscreen double-act]

On the British side of things, Thick of It veterans Olivia Poulet and Joanna Scanlan score a couple of solid cameos, while Gina McKee gets to deliver one of my fave lines in the entire film, suggesting that their party’s terrifying Director of Communications, ‘Malcolm Tucker’ (Peter Capaldi), constructed his equally wrathful protégé ‘Jamie’ in a lab out of “bits of old psychopath”. Hee!

As I’ve said before, this style of satire is a little too cynical and acidic for me to love it outright, but I can still admire the eloquence and intelligence behind it…  and there are a lot of very funny jokes and quotable zingers to be enjoyed here… even if the real-life shenanigans that inspired the script are so damn depressing…

* Besides the presence of a tall, gawky Jonah-esque junior staffer, named ‘Chad’ (Zach Woods), I mean.

A comic book writer with an interest in feminism, philosophy, and affirmative action. He/him.
View all posts by Dee CrowSeer →
This entry was posted in Rants about Films and tagged Anna Chlumsky, Gina McKee, In the Loop, Joanna Scanlan, Mimi Kennedy, Olivia Poulet, The Thick of It, Veep. Bookmark the permalink.