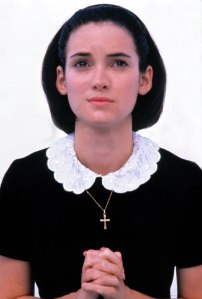 Now that I have a carrier-bag of X-Files DVDs to work through, I find I have a lot less patience when it comes to watching the random movies that crop up on TV. For instance, this weekend Ch5 were showing Mermaids (1990) and Michael (1996) as part of a mini marathon of Bob-Hoskins-Movies-With-One-Word-Titles-Beginning-With-The-Letter-”M”, but I couldn’t really settle into either one of them.

In theory Mermaids should be a must-watch, because the cast features two of my all-time biggest teen crushes, Winona Ryder and Christina Ricci… but their characters are saddled with so many quirks, that I found it very hard to care about them as people, rather than contrived fictional creations. And I had the same issue with Cher’s itinerant-mother-character that I did with the Mom in Perfect Man… I just think it’s cruel and selfish to uproot your kids every time an ill-advised romantic affair goes south, and I kinda hated her for it, from the outset. Of course, I watched this flick back in the VHS days, so I had a vague memory of the story getting more and more melodramatic as it went along, and frankly I just wasn’t in the mood for that, so I turned it off after about fifteen minutes or so. Still, it was fun to travel back to a time (however briefly) when Ryder was the cutest, coolest girl in the world. Sigh…

As for Michael, well… I’m still fascinated by movies about angels and demons, and I do like the idea of an archangel who’s running out of time on the material plane, and just wants to indulge in some earthly pleasures before he goes (including random violence!?), but the movie itself was a predictable, schmaltzy drag. To be fair, Andie MacDowell is pretty adorable in the leading role of a dog-trainer pretending to be an “angel expert” (for reasons I can’t be bothered going into)… still, the high point for me was when Joey Lauren Adams popped up as a chirpy pie waitress, and had a few cute scenes with Travolta, rocking a slight (presumably natural) Southern accent, and dancing around like a loved-up Dharma. Bless her. According to the credits, Carla Gugino played the honeymooning ‘Bride’ who drives the protags to the motel where they meet Adams’s character, but I didn’t recognise her at all when I watched it. That was long before she became famous though… and she only had a line or two at most.

[In case you were wondering, the low point (among many, many cringe-worthy moments) had to be Richard Schiff’s cameo as a wacky “Italian waiter” with a truly atrocious accent… I’m guessing that clip wasn’t on the show-reel he used when applying for a role on The West Wing!]