The FBI’s Most Unwanted 8: A New Wrinkle 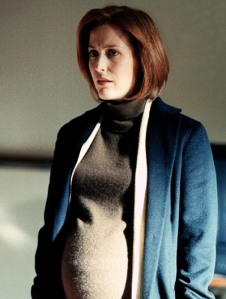 By the time it came to shoot the eighth season of The X Files, the show’s stars were starting to get itchy feet. After a rather bitter behind-the-scenes dispute over money owed, Duchovny took a hiatus for half of the season, and Gillian Anderson insisted on being allowed to spend more time with her young daughter, Piper Maru, who was still attending school in Canada. Which is all very admirable and heart-warming for the Anderson family, but it kinda sucks for us Scully-fans, because she is absent for far too much of the time. That said, I do appreciate the fresh energy that Robert Patrick brought to the series as ‘Special Agent John Doggett’… aside from having the perfect “cop voice”, he makes for a very likeable and engaging “guy’s guy” action hero, and it’s fun to see him react to the craziness he’s faced with, while Scully is forced to play the role of his mind-opening mentor. Duchovny was often credited with adding jokes to the more serious episodes, and I think it’s fair to say that without him The X-Files became a far more po-faced, meat-and-potatoes procedural than it ever was before. Despite being a comedy fan (and a horror-comedy fan at that), I thought this season had a more consistent tone and reality level, even if the individual episodes weren’t quite as memorable as those that came before them. I can understand why some fans might have felt alienated back in the day, but after binging on so many episodes over such a short period of time, I actually welcomed the change of pace… although I was also glad when Mulder returned to drop some of his trademark bon mots in the latter episodes.

While we’re on the subject of new characters, ep #8.14 (“This Is Not Happening”) saw the debut appearance of Annabeth Gish as ‘Special Agent Monica Reyes’… who I like to think of as a slightly less useful ‘Deanna Troi’, in that she claims to be able to perceive cosmic energy, but doesn’t seem much more insightful, intuitive or aware of her surroundings than any of the other agents! Yes, she has spooky visions now and again, but she still gets duped just as easily as everyone else on the show. The character was supposedly created to replace Scully, but… no. Not in my heart, she doesn’t! Not even close. According to Gish: “Chris [Carter] really wanted Monica to be a sunny force, which is hard to play sometimes. But it’s a natural instinct for me; I can find happiness in the midst of darkness.” And I can kinda see what they were going for, but I don’t think it works in practice… when she smiles at inappropriate moments she just looks crazy to me. As Judge Judy would say, she had an “inappropriate affect” that I found off-putting, and I just couldn’t warm to her at all… especially after the writers introduced ‘Leyla Harrison’ (Jolie Jenkins), the totes adorable fangirl FBI Agent, who buddied up with Doggett in ep #8.19 (“Alone”). Despite her lack of field experience, I think she would have made a much better long-term partner for the gruff, grizzled lawman than Reyes does… helping him to see the upside of their assignments, while he teaches her the nitty-gritty of police work. To be honest, I worried she was “dead meat” from the moment her smiley face first appeared on screen, so I was glad to see she survived the episode with all her limbs and senses intact… it’s just a shame that she didn’t become a full-time team member!

Sadly, after the guest-fest of last season, this one was rather barren on the female front:

Kim Greist appeared in ep #8.5 (“Invocation”) as ‘Lisa Underwood’, the mother of a young boy who vanished from a fairground ten years earlier, before appearing out-of-the-blue in the present day, looking the same age as he did when she last saw him! According to Wikipedia, Greist herself “disappeared from the screen” in 2002, but not before appearing in such cult movies as C.H.U.D., Brazil and Manhunter. The late Kellie Waymire appeared in ep #8.8 (“Surekill”) as ‘Tammi Peyton’, a super-cute secretary who foolishly skims funds from her sociopathic, sexually-exploitative boss. Tut-tut! Sadly Waymire died from a cardiac arrest in 2003, at the age of just 36, but she’d already racked up one-off appearances in Wonderfalls, Ally McBeal and Seinfeld, as well as recurring roles in Star Trek: Enterprise and Six Feet Under. Penny Johnson appeared in ep #8.12 (“Medusa”) as ‘Dr. Hellura Lyle’, a disagreeable doctor from the Centre for Disease Control, who went down into the deserted subway tunnels with Doggett, to investigate a mysterious death. Johnson has had recurring roles in Star Trek: Deep Space Nine and 24 (as the President’s wife, ‘Sherry Palmer’), and can currently be seen in Castle as ‘Captain Victoria “Iron” Gates’… but I’ll always think of her as long-suffering assistant ‘Beverly Barnes’ on The Larry Sanders Show. Denise Crosby appeared in ep #8.17 (“Empedocles”) as ‘Dr. Mary Speake’, who winds up treating a man carrying a contagious form of pure evil, as well as looking after Scully in a later episode.

Frances Fisher appeared in ep #8.20 (“Essence”) as ‘Lizzy Gill’, a super-helpful nurse recommended by Scully’s Mum, who turns out to be secretly working with… er… that guy from the other episode who was lying about having an alien baby, because… er… nope, no idea. In fact, she later claimed to be a scientist, who’d been working on the Syndicate’s project to impregnate women with hybrid babies… before suggesting that Scully’s baby wasn’t even slightly alien, but perfectly human “without any human weaknesses”. M’kay. Fisher’s most famous film role was probably playing the mother of Kate Winslet’s character in Titanic, but she’s also appeared in funner stuff, like L.A. Story, Gone in 60 Seconds, and The Host. And finally, Dale Dickey appeared in ep #8.21 (“Existence”) as an unnamed ‘Game Warden’ who helps to deliver Scully’s miracle-baby, despite getting a bowl of boiling hot water thrown in her face by Reyes, when she finally realises the warden is an incognito alien “super solider”. Note: Reyes only figures this out after she sees the blatantly obvious bumps on the back of the warden’s neck, that literally anyone else could have seen in her place…. not by reading her aura, or sensing her energy, or anything mystical like that. Gah! Dickey is a veteran “character actress”, who’s racked up cameos in various TV shows, including My Name Is Earl, The Closer and Breaking Bad… but I recognised her from her current run on True Blood, playing werewolf grandma ‘Martha Bozeman’, whose performance has been one of the few bright spots in the terminally irritating and boring “shifter” subplot. Meh.

On the more manly side of things: Ep #8.2 (“Without”) saw the final appearance of Brian Thompson as the ‘Alien Bounty Hunter’… and I’m glad he got to face off against Patrick, since his character was such a blatant Terminator/Terminator 2 rip-off… even if Scully was the one to take him out, with a well-aimed killshot to the back of the neck. Blam! Brent Sexton appeared in ep #8.3 (“Patience”) as a gravedigger… and then again in ep #8.12 as a structural engineer helping D&S to explore the potentially contaminated subway tunnels. Joe Morton appeared in ep #8.6 (“Redrum”), as a prosecutor trying to prove he’s innocent of murdering his wife, while his perception of time moves backwards, day by day. As a Philip K. Dick fan from way-back, I thought this was a pretty great gimmick… and Morton gave a very strong performance in the lead role, even if it did minimise Scully’s involvement in the story. Danny Trejo also appeared in this episode, as the vengeful villain responsible for the murder and frame-up job. Michael Bowen appeared in ep #8.8 as a legally blind exterminator, who exploits his twin brother’s x-ray vision to bushwhack drug dealers, so he can steal their merchandise. I read that James Franco also appeared in this episode as a random police officer, but I can’t say I spotted him myself. Arye Gross appeared in ep #8.9 (“Salvage”) as a corporate scientist intent on concealing the secret origins of a murderous metal man, played by Wade Williams. 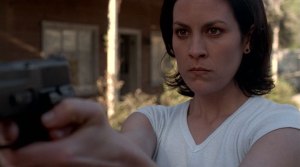 Deep Roy appeared in ep #8.10 (“Badlaa”) as a tiny, legless Indian beggar with magickal powers, and a very icky way of sneaking through customs. In ep #8.13 (“Per Manum”) Adam Baldwin made his first appearance as Doggett’s old marine buddy and top-level informant, ‘Knowle Rohrer’ (The Rural Juror!)… who doesn’t take long to reveal the fact that he’s a secretly evil super-soldier. Boo! Eddie Kaye Thomas returned in ep #8.14 as the messed up corpse of ‘Gary Cory’, lying on an autopsy slab looking icky… so, either he’s a huge fan of the show, or his American Pie pay-cheque hadn’t cleared yet? This episode also featured the first appearance of Judson Scott as ‘Absalom’, a creepy cult leader, who actually had a lot of useful information to pass on regarding the  oft-delayed alien invasion. M.C. Gainey appeared in ep #8.18 (“Vienen”) as a friendly engineer on an oil drilling platform, who turns out to be a flesh-burning alien-stooge… just like all of his (non-Latino) colleagues. Meanwhile, Miguel Sandoval played the Vice President of the big, fancy oil company, who just wants to keep the product flowing, regardless of how many people get infected by the nefarious “black oil” they’re bringing up. And finally Zach Grenier appeared in ep #8.19 as an overambitious biologist, who can transform himself into a were-lizard with the ability to blind and pre-digest his prey with a single blast of venom. Nasty.

Oh, and I think James Pickens Jr. does some fine work as recurring antagonist ‘Deputy Director Kersh’… but I couldn’t help missing ‘The Cigarette Smoking Man’, who was totally absent this season (presumed dead… but I know he isn’t).

1 Response to The FBI’s Most Unwanted 8: A New Wrinkle