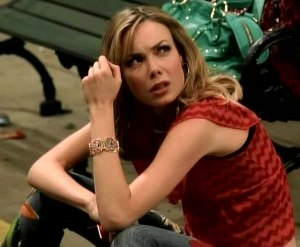 Checking out Vernee Watson’s resume t’other day, I discovered that she was one of only three actors to appear in both The Big Bang Theory’s unaired pilot and the series proper, as we know it. Intrigued, I tracked down a bootleg copy of the pilot online, and braced myself…

To draw a suitably nerdy analogy, this episode depicts the familiar characters of ‘Leonard’ and ‘Sheldon’ trapped in a much darker timeline, a la the Star Trek: TNG episode “Yesterday’s Enterprise”. Their clothes and apartment are duller and dingier, and instead of befriending a super-cute waitress named ‘Penny’ who’s just moved in across the hallway from them, they pick up a trashy-hot homeless beautician named ‘Katie’ who’s sat crying on the curb outside a high-IQ sperm bank. Katie is played by Amanda Walsh, and was supposedly pitched as “a street-hardened, tough-as-nails woman with a vulnerable interior”… unfortunately, the test audiences felt she came as too much of a meanie, and I have to agree. Normally I’m a big fan of tough chicks, but there’s something deeply unpleasant about this character… she seems so proud of the fact she slept with her mother’s boyfriend first, and angry that married men keep choosing their wives and families over her… and rather than analyse or change her bad behaviour now that she’s hit rock-bottom, she chooses to get blotto drunk and break stuff in the guys’ apartment. She’s just totally unsympathetic… and I don’t really see how they could have justified her staying in the guys’ spare room over the long-term, considering how much she seems to despise them. Feh.

It’s true that Penny often exploited and snarked at the guys from time to time too, but she clearly found them amusing and endearing, even when she didn’t really understand what they were saying. And when her ex-boyfriend steals Leonard’s and Sheldon’s pants, after she asks them to retrieve her TV from him in the real pilot, she’s quick to sympathise, apologise, and kiss/hug them for trying. She’s just a much warmer, sweeter and funnier character all around, and Kaley Cuoco is straight-up adorable from the first moment she appears on-screen. The show really wouldn’t be the same without her… and now we have the proof! On the other hand, the unaired pilot does boast the ideal gender balance that the real show took several seasons to achieve, thanks to Leonard’s geeky female colleague ‘Gilda’, played by Iris Bahr. She’s a kind of a proto-‘Amy’, but with a romantic fixation on Leonard, instead of Sheldon… and I can’t help wishing they’d kept her in the mix going forward. I mean, she’s criminally underwritten as a character, and doesn’t have the pizazz of a ‘Raj’ or a ‘Howard’ (who are entirely absent from the faux-pilot), but I always saw the lack of smart female characters as a failing in the first few seasons.

Other than all that, the biggest difference between the two timelines is that in this one, Sheldon not only exhibits a sexual interest in women (specifically those with “ample hindquarters”), he’s actually HAD FULL-ON INTERCOURSE! OMG!!! *

So, all in all, a terrifying peek into a world that was never meant to be… although, as a writer, it’s fascinating to watch the two pilots back-to-back to see how many jokes and plot elements were salvaged for the version that aired in our universe.

* With Gilda, at a Star Trek convention, in case you’re curious.

A comic book writer with an interest in feminism, philosophy, and affirmative action.
View all posts by Dee CrowSeer →
This entry was posted in Rants about TV and tagged Amanda Walsh, Iris Bahr, Kaley Cuoco, The Big Bang Theory, Vernee Watson. Bookmark the permalink.