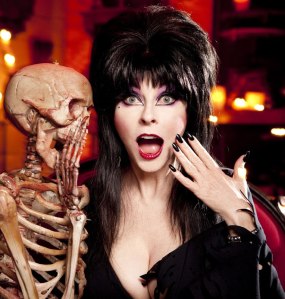 While tracking down the secret, unseen Big Bang Theory pilot, I also stumbled on the unaired pilot of The Elvira Show (1993), which some kind souls have posted on YouTube for posterity.

The show stars Cassandra Peterson (aka ‘Elvira’) and Katherine Helmond as two “broom-closeted” witches, hiding out in a small town, performing psychic readings and selling potions to the unsuspecting locals. Out of the blue, Elvira’s nebbish niece ‘Paige’ (Phoebe Augustine) shows up at the door, hoping to find the nice, normal family that she’s been craving ever since her late parents left her to be raised by nuns. At first her “aunts” are afraid that the girl is going to cramp their style, but they eventually realise that Paige has the gift of magick herself, and agree to let her stay. Oh, and did I mention they have a sarcastic talking cat, named ‘Renfield’? Yeah… two aunts, a teenage witch, and a talking cat … now, where have I seen that before? Hmmm… 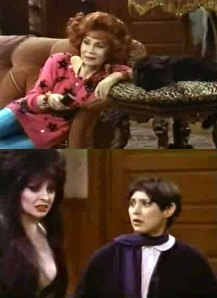 The way Peterson tells it, the pilot milked massive laughs from its live studio audience, and was picking up a lot of positive, pre-emptive buzz… “but then the president of CBS at the time, Jeff Saganski, on the day that they screen all the pilots and pick the ones that are going to go on, he got ill – I think with pneumonia – and had to be put in the hospital. So this guy flew out, this VP from New York named Howard Stringer who was head of sports for CBS, and when he saw my show, he said, “Uh… We can’t show those kinds of tits on TV.” [Laughs.] Just like that.” So Elvira got canned, and Peterson was sent packing… then a couple of years later, some sneaky grave-robbers dug up the remains of her show and reanimated it with a new cast, and a more family-friendly focus, to become Sabrina, The Teenage Witch! Of course, ‘Sabrina’ was a pre-existing comic book/cartoon character, but it’s worth noting that in the original comics her pet cat ‘Salem’ was a mute ginger tom, rather than the back-talkin’ black cat that modern TV audiences are familiar with (apparently he’s been recoloured in reprints of earlier Sabrina stories now, to maintain continuity), and her aunts were old-timey witches, wearing pointy pilgrim hats. 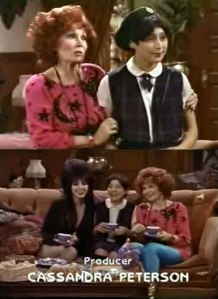 But enough with all this behind-the-scenes skulduggery… what about the show itself? Well, obviously corny wordplay and double entendre are a core part of Elvira’s schtick, so I did find myself groaning from time to time*, but there were some solid gags in there too, and some fun FX. Peterson’s a very charismatic performer, and Elvira is a pretty compelling character… even without the plunging neckline and high-slit skirt (although they’re a nice bonus, for all us pervs). Helmond was already an old-hand at this sort of sitcomedy, after serving her time on Who’s the Boss?, and she had a good dynamic with the rest of the cast (not to mention a rather disturbing cackle). Augustine was more of a timid tomboy than Melissa Joan Hart, but she had a certain quirky charm… plus the cult kudos of appearing in Twin Peaks (and Fire Walk With Me), as a pal of Laura Palmer’s. Oh, and Cristine Rose also appeared as a police detective intent on busting Elvira for selling harmful potions… although I’m not sure if that was meant to be a recurring role, or just a one-off (I hope they were planning to get her a better wig, if the series was picked up!) Overall, I’m not really sure what kind of audience this show was pitched at, but teenage-me would have LOVED it!

* The gags weren’t any more groan-worthy than the ones on 2 Broke Girls, and that’s still a pretty big hit. Come to think of it, Kat Dennings would make a pretty awesome Elvira! Mmmm…

A comic book writer with an interest in feminism, philosophy, and affirmative action.
View all posts by Dee CrowSeer →
This entry was posted in Rants about TV and tagged Cassandra Peterson, Cristine Rose, Elvira, Katherine Helmond, Phoebe Augustine, Sabrina the Teenage Witch. Bookmark the permalink.
%d bloggers like this: