When Life Gives You Lemlers 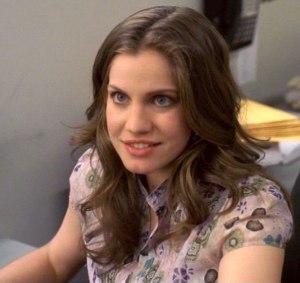 On a whim I decided to rewatch the first season of 30 Rock as a pick-me-up, and while the jokes have become rather over-familiar through frequent viewing, I was surprised to spot a couple of cameos I’d never noticed before… or rather, I didn’t actually know who the actresses were the last time I watched these discs…

First up was Aubrey Plaza, making her TV debut in ep #1.7 (“Tracy Does Conan”) as an unnamed NBC ‘Page’ with a single line… and then there was Anna Chlumsky in ep #1.17 (“The Fighting Irish”), as ‘Liz Lemler’, the confusingly-named girlfriend of a cute guy that the show’s heroine, ‘Liz Lemon‘ (Tina Fey), sets her sights on. Chlumsky only gets a couple of short, “straight woman” scenes here, but she milks them for all their worth, bless her. The same episode also featured appearances by Siobhan Fallon and Molly Shannon as Jack’s rowdy Irish-American relatives… and it’s only now, seeing them written down together in this context, that I realise how very Irish their names are!

Some other notable guest-stars were: Isabella Rossellini as Jack’s rather unbalanced wife, ‘Bianca Donaghy’ (eps #1.12/13)… April Lee Hernandez (aka April Hernandez Castillo) as ‘Vikki’, an aspiring-actress who tried to schmooze Pete (ep #1.12)… and Emily Mortimer as ‘Phoebe’, a ridiculously fragile gold-digger, who somehow managed to seduce Jack, despite claiming to have “hollow bones” (eps #1.19/20/21). Since it’s suggested that her character’s English accent was fake, I always wonder if she’s fibbing about the “avian bone syndrome” too… but sadly they never call in the eminently reliable Dr. Spaceman for a definitive diagnosis.

Oh, and Rachel Dratch, of course, popping up as various supporting characters throughout the season (including “Elizabeth Taylor”, a cat trainer with a crush on Liz, and an imaginary blue monster), as compensation for losing the role of ‘Jenna’ to Jane Krakowski. Apparently Dratch has written a memoir called Girl Walks Into A Bar which touches on that period in her life… but I haven’t read it, so I can’t really comment.