Of Veeps And Vaginas

Being a Brit, I wasn’t able to watch the Emmy Awards ceremony in full, so I’ve been trying to catch up on all my fave nominees via the internets.

Firstly, congrats to Julia Louis-Dreyfus, who won Best Lead Actress in a Comedy Series, for her sterling work in Veep. According to Wikipedia, this is JLD’s fourth Emmy win to date… which also makes her the only woman to have won awards for three separate comedy series (Seinfeld, The New Adventures of Old Christine and Veep), while her initial nod made her the most nominated actress in Emmy Award history, with a total of fourteen noms (plus another two for producing the first two seasons of Veep). Yowsa! That lady’s a trophy-magnet! She also gave a very funny, in-jokey acceptance speech, shadowed by co-star (and fellow winner) Tony Hale, as her ever loyal purse-holder and prompter. Bless ‘em. Sadly, their fellow cast-mate Anna Chlumsky was denied the win for Best Supporting Actress in a Comedy Series… although she did get an amusing cutaway gag during JLD’s speech, so that’s some consolation, right? 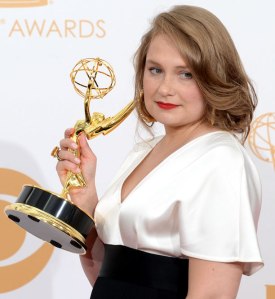 Either way, the award itself went to Merritt Wever, for her work on Nurse Jackie… which I’ve never seen, but she’s been so great in New Girl that I don’t doubt she deserves it. She also made a very short and sweet acceptance speech, which probably won her a few new fans to go along with her bling.

On the more Dramatic side of things, Claire Danes won her second consecutive Best Lead Actress Emmy for Homeland, which also won in the Best Writing category, and returns for a third season shortly… so, let’s hope they can keep the quality up, because frankly I’m not sure how I feel about the way they’re stringing out the whole Carrie/Brody romance right now.

Sad to say, American Horror Story: Asylum and Game of Thrones won precisely jack all this year… so let’s hope the Emmy judges are haunted by visions of Bloody-faced Serial Killers and Snow Zombies every time they try to sleep from now on, as punishment for this scandalous oversight.

As a special treat for the viewing audience, host Neil Patrick Harris launched into a half-time musical number, featuring cameos by Nathan Fillion and Sarah Silverman… which was cute an’ all, but I’d much rather see Big S winning another award for herself, dammit! Whatever happened to that pilot all the networks were fighting over a coupla years back? Was that all just a cruel prank? Double dammit!! Still, you have to admire the way she admitted to picking up her little-black-dress for $60 online, during the backstage interviews. Keepin’ it real, and makin’ thrift look foxy… yay for her!