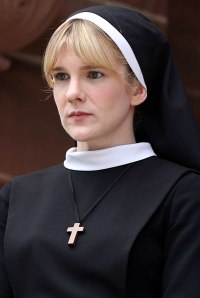 American Horror Story is back tonight… hurrah! I was too busy working on scripts to blog about the previous season (“Asylum”), but for the record I thought it was great fun. They’ve clearly tried to make the show a little more coherent since the bat-crap crazy first season, so there wasn’t quite the same WTF!? factor at work, but it was still pretty stuffed with incongruous absurdity… Mutants! Serial Killers! Psychotic Santas! Nuns! Nymphomaniacs! Nazis! Random musical numbers! Why not?

My pick for the season’s MVP, both character and actress-wise, would have to be Lily Rabe as ‘Sister Mary Eunice’. I don’t want to go into spoiler-y details, but I thought she was absolutely hilarious, and her transformation from timid innocent to snarky seductress was a joy to behold.

I’ve tried to avoid reading too much about the new season, which involves a coven of witches living in modern-day New Orleans, although I have been keeping a curious eye on the ever-growing cast list. Despite several big-name announcements (including Kathy Bates and Angela Bassett), the casting news I’m most excited about is Taissa Farmiga’s reabsorption into the AHS ensemble. Yay! Apparently she’ll be playing a teenaged witch, and have some sort of relationship with Evan Peters again, but that’s all I (need to) know for now…

Another upside to the show’s return is that it will help to wean me off Sleepy Hollow, which I was watching solely for its spooky supernatural elements, while cringing through the dumb-ass dialogue and stories. Aside from the fact he’s just a poor man’s Sherlock-from-Elementary, I was particularly aggravated by the way their ‘Ichabod Crane’ deserted the British army during the American Revolution, after discovering that “we” Brits were literally in league with the Devil, and that “our” victory would bring about the actual end of the world! Feh.