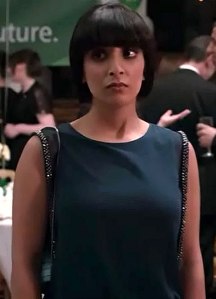 I was rather looking forward to BBC2’s new comedy-thriller The Wrong Mans after spotting Chandeep Uppal’s name in the main cast list… but once again the poor woman was consigned to the out-of-focus edge of frame, as the white male co-writers/stars greedily hogged all the screen time for themselves. Boo! Over the series she averaged one brief appearance per episode, and it wasn’t until the final episode (which aired last night) that we actually got a decent shot of her as she delivered her short, perfunctory lines! What a waste of a talented, beautiful, and chronically underemployed actress. Gah!!!

Sometimes I wonder if I’m the only one who’s ever even heard of Affirmative Action… and it’s particularly annoying in this case, because I firmly believe that genre fiction could (and indeed should) lead the way in this regard. For example, the “inciting incident” that set the whole plot in motion here involved a lowly council worker witnessing a car crash while walking to work, then innocently picking up the injured driver’s ringing mobile phone, and being drawn into a “web of crime, conspiracy and corruption”. So theoretically anyone of any gender, sexual orientation or ethnicity could have witnessed the crash and answered the phone… and they could have subsequently chosen to share their life-changing secret with pretty much anyone else in the office (including Uppal’s character)… so there’s no real narrative reason for both main characters to be straight white males. It’s just the way things are. Sigh…

For all I know this show was a critically acclaimed monster-hit that will go on to win big at the next BAFTAs… but to me it was just old, itchy rope. Meh.

A comic book writer with an interest in feminism, philosophy, and affirmative action. He/him.
View all posts by Dee CrowSeer →
This entry was posted in Rants about TV and tagged Chandeep Uppal, The Wrong Mans. Bookmark the permalink.