There are plenty shows that successfully balance heart-breaking drama with cathartic comedy… but Mitchell & Webb’s latest offering for the Beeb,  Ambassadors, wasn’t one of them. It probably doesn’t help that Armando Iannucci and his cohorts have set such a high-standard for political satire in recent years… but even without the shadow of Malcolm Tucker looming over proceedings, this would still have been pretty weak sauce, with broad sitcom schtick repeatedly undermining the potentially nail-biting tension associated with political uprisings, secret police squads, and capricious dictatorships. I also found the show’s knee-jerk Francophobia pretty unforgivable, but maybe that’s just me? 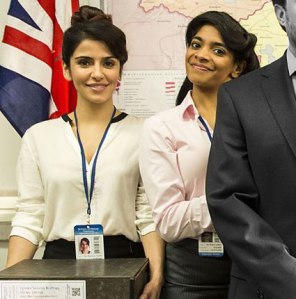 One thing the show did excel at, however, was casting cute Desi actresses in key supporting roles, which earns it a tip of the hat from me, all the same. First up was Shivani Ghai, rocking a Slavic accent as ‘Natalia’, the British Embassy’s ever-eager and upbeat Head of Public Relations… then there was Amara Karan, rocking her natural RP accent as ‘Isabel’, the unashamedly-ambitious Trade and Political Secretary. Ghai was lucky enough to score a subplot of her own in the first episode, involving a visiting actor aggressively flirting with her, but sadly Karan had little to do except look gorgeous and occasionally annoy the other characters. Meh. Here’s hoping series 2 kicks off with Isabel poisoning her bosses’ tea, and staging a one-woman coup…

A comic book writer with an interest in feminism, philosophy, and affirmative action.
View all posts by Dee CrowSeer →
This entry was posted in Rants about TV and tagged Amara Karan, Ambassadors, Shivani Ghai. Bookmark the permalink.