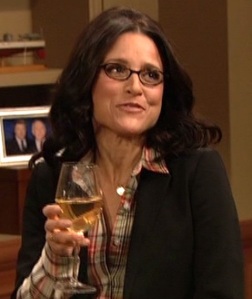 Finally caught up with the fifth season of 30 Rock, and laughed myself silly. I don’t really have anything to say about the quality or hilarity of this season in comparison to its predecessors, but I was glad to see that this boxset came with subtitles, so I had a better chance of catching all the quick-fire gags that normally whizz past my ears while I’m chortling away. Hurrah! The only downside is that most of them were written in UPPERCASE CAPITALS, so they obscured half the screen and made it seem like everyone was SHOUTING ALL OF THEIR LINES! SIGH!!!

Meanwhile, several noteworthy actresses made surprise cameos here… some more surprising than others: First up was Julia Louis-Dreyfus as a substitute ‘Liz Lemon’ in the cutaway sequences of the brilliant “Live Show” episode (ep #5.4). Tina Fey was full of praise for her counterpart on the commentary track, and I think it says a lot about JLD’s modesty and esprit de corps that she was willing to understudy Fey in the first place. For a couple of crazy seconds there, I couldn’t help thinking how great an alternate-reality 30 Rock would be with JLD in the lead… not that there’s anything wrong with the regular version we have in this reality, of course! This episode also featured an encore appearance by original-co-star-turned-recurring-bit-player Rachel Dratch, who returned for this season’s other landmark event, when the show celebrated its 100th episode (#5.20/21). 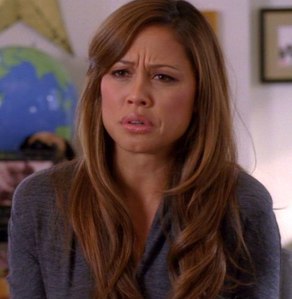 Vanessa Minnillo (aka Vanessa Lachey) appeared in ep #5.13 (“¡Qué Sorpresa!”), as a news anchor of indeterminate ethnicity*, intent on exposing the secret pregnancy of Jack’s icy amour, ‘Avery Jessup’ (played by recurring guest-star Elizabeth Banks). Minnillo has since gone on to score a major sitcom role of her own, alongside Brenda Song… which would be great news, except that the sitcom in question is called Dads, and it’s god-awful. To be fair, I’ve only seen the pilot so far, but I hated the premise so much I doubt I’ll bother watching any more… father-and-son stuff always leaves me cold, and the regressive racist humour made it all the more gruelling! Shudder. Chloë Moretz appeared in ep #5.16 (“TGS Hates Women”), as the secretly-evil granddaughter of NBC’s new Big Daddy… though sadly, we didn’t get to see her bust out any kick-ass ninja moves on Jack for trying to steal her legacy. What a waste! 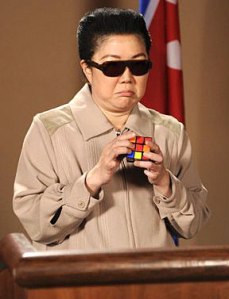 Finally, and most confoundingly of all, ep #5.22 (“Everything Sunny All the Time Always”) found Avery being taken hostage in North Korea, where she was forced to present propaganda-heavy “news” reports to the populace. As we all know, the late Kim Jong-Il was a short-haired, tattoo-free, manly fella, so clearly Margaret Cho was the obvious casting choice, right? Maybe not, but she’s damn funny in the role, and enjoyed her cameo enough to post the following note on her official website: “I had such a fun time on set and I loved the way it came out! It’s such an amazing show and as always it’s super surreal to be on something that you’re already a fan of! Also playing Kim Jong-Il is a longtime dream. He’s my Evita.” M’kay.

Now, I have to go slap my brain before it starts singing the Alec Baldwin song from Team America… dammit!

* That’s a reference to a running joke in the episode itself, not just me being weird (again). For the curious, Minnillo is of mixed Filipino, Irish and Italian descent. NOT THAT IT MATTERS.

2 Responses to When Two Lemons Collide