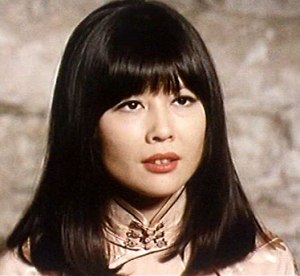 A couple of days after referencing Christopher Lee’s Fu Manchu flicks in a blog post, I found all five DVDs going cheap in a second-hand shop, and felt compelled by the Law of Synchronicity (and Politically Correct curiosity) to check them out. Since they were split into two separate collections, I’m only going to tackle the first three entries here: The Face of Fu Manchu (1965), The Brides of Fu Manchu (1966), and The Vengeance of Fu Manchu (1967).

Leaving the racial/cultural issues aside for a moment, the movies themselves proved to be fairly entertaining, no-frills spy adventures… like low-budget Bond movies with the same persistent, pernicious “criminal mastermind” repeatedly attempting to conquer the Earth, only to be defeated by a fuddy-duddy detective duo, who came across as a severely-dumbed down Holmes & Watson. It’s the kind of easy-breezy pulp nonsense where heroes and villains alike are easily fooled by the most rudimentary of disguises, and everyone has a peculiar habit of loudly and explicitly repeating sensitive information for all the world (and supposedly unconscious enemies) to hear! Tch! 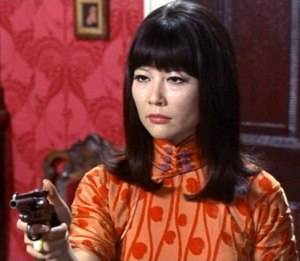 For some reason, Fu Manchu’s schemes always seem to involve kidnapping the attractive, twenty-something daughter of the leading expert in a particular field of scientific research, and then threatening her life until said expert agrees to collaborate on the villain’s doomsday-device du jour. Sadly, it’s never explained why so many of the world’s most brilliant scientists happen to have attractive, twenty-something daughters, rather than bratty teenage sons… and the wives/mothers are never shown on-screen either, so I strongly suspect that cloning is involved somehow. Oddly enough, Fu Manchu seems perfectly capable of compelling other, daughter-less men to do his bidding via simple hypnosis, so I can’t help thinking that if he hadn’t wasted so much time kidnapping all those young women, he might actually have succeeded in conquering the world before anyone even knew what he was up to! Silly old perv. 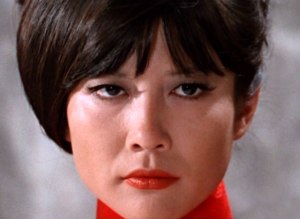 Still, all these larks can’t distract us from the fact that the eponymous evildoer is a white English actor in “yellowface” make-up and old-timey “Oriental” garb. My issue with this is partly political, but it’s also a question of aesthetics and authenticity… I mean, whether you believe that it’s offensive or not, I think we can all agree that it looks damn silly, right? Meanwhile, Fu Manchu’s henchmen often dress up in innocuous guises as they go about their bad-guy business, which fosters an atmosphere of indiscriminate Sinophobia where all Asians are guilty until proven innocent, and our “hero” has a free-pass to punch-out pretty much any “Chinaman” he encounters, regardless of the context. These pre-emptive assaults inevitably lead to the rather implausible sight of grey-haired white guys in wool suits and raincoats somehow managing to out-fight and out-manoeuvre entire gangs of fit, young, pyjama-clad Thugs! On the other hand, each movie contained at least one Asian (or Arab) “good-guy” risking their neck to bring down Fu Manchu’s organisation, so they’re still more progressive than that god-awful Airbender adaptation… even if these heroic supporting characters are usually pushed aside and forgotten about once whitey rocks up to save the day. 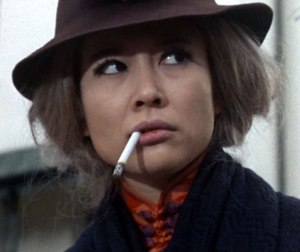 The only recurring female character in the series is Fu Manchu’s beautiful-but-deadly daughter/lieutenant ‘Lin Tang’, played by the properly Chinese actress Tsai Chin. Personally, I didn’t feel that she ever managed to project the sort of demented, sadistic menace that the role really called for… but this probably has less to do with Chin’s skills as an actress, and more to do with the fact that –  as the first Chinese student trained at London’s Royal Academy of Dramatic Art (aka RADA) – she felt the material was beneath her, and only took these gigs for the money and the experience. To quote from her best-selling memoir, Daughter of Shanghai*: “Stereotype roles are one-dimensional characters demanding little creative energy or artistic truth from those who play them… When this happens, we become de-personalized which further arrests our artistic development.” Fair enough. On a far more facile level, she does get some great hair-dos and gorgeous frocks to wear… though I thought her sexiest look was when she was disguised as an old cleaning lady, with a grey wig and a fag hanging from her lips! 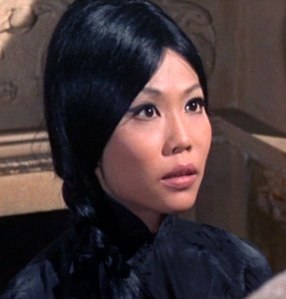 Several other Asian actresses scored minor supporting roles throughout the trilogy: First up was the hero’s lovely young handmaiden (!?) ‘Lotus’, who appeared in both Face and Brides, played by Poulet Tu… aka Francesca Tu, Francisca Tu, or Franziska Tu! Although she was born in China, Tu had a German stepmother and spent much of her career working in that country, so there aren’t many credits on her resume I recognise… aside from a cameo as ‘Osato’s Secretary’ in the Bond flick You Only Live Twice. Then there was Lucille Soong, who had an uncredited cameo as a “Bride” (possibly named ‘Ling’) in Brides… and later went on to appear in The Joy Luck Club, the 2003 remake of Freaky Friday,  Just Like Heaven, and such disparate TV shows as The Prisoner, Coronation Street, Dharma & Greg, Desperate Housewives and The Sarah Silverman Program! Finally, in Vengeance, Lotus was replaced by ‘Jasmin’, another conspicuously cute young handmaid, played by Mona Chong… who doesn’t seem to have many major credits on her resume, though she has played a remarkable number of nameless “Girls” in her time (one Japanese Girl, two Chinese Girls, one Knobby’s Girl, one “La Belle Amie” Girl, two First Girl Islanders, one Vietnamese Girl, and one Bar Girl!).

A comic book writer with an interest in feminism, philosophy, and affirmative action.
View all posts by Dee CrowSeer →
This entry was posted in Rants about Films and tagged Francesca Tu, Francisca Tu, Franziska Tu, Lin Tang, Lucille Soong, Mona Chong, Poulet Tu, The Brides of Fu Manchu, The Face of Fu Manchu, The Vengeance of Fu Manchu, Tsai Chin. Bookmark the permalink.
%d bloggers like this: