I think it’s fair to say that pseudo-satirical teen comedy Sugar & Spice (2001) comes up short, both in terms of its running time (a scant 73 mins), and its delivery of big laughs. Curiously, the script is credited to a non-existent writer named “Mandy Nelson”, because the actual screenwriter, Lona Williams, fell out with the producers before the movie was released… though the reliance on mean-spirited mockery and sub-Heathers patter immediately made me think of Williams’ previous effort, Drop Dead Gorgeous, so she’s certainly left her creative stamp on the final product… for better or worse…

One of the biggest misjudgements, imho, is to have the whole story narrated by a bitchy B-list cheerleader (‘Lisa Janusch’, played by Marla Sokoloff), who actively despises the main characters. Even if her petty, pointlessly homophobic commentary had actually been funny, it still would’ve prevented viewers from investing in the broadly-sketched, but theoretically sympathetic main characters she (metaphorically) assassinates. In my hypothetical remake, I’d let the de facto heroine (‘Diane Weston’, played by Marley Shelton) tell her own damn story…

Diane is the adorably dippy head cheerleader at a blah American highschool, who falls head-over-heels (literally!) for the hunky new quarterback (James Marsden), and soon ends up carrying his baby in her belly. Ostracised by their disapproving parents, the cute-but-dim couple set about preparing for their child’s impending arrival, but Diane is painfully aware of how bleak their financial future will be. After taking a job at a local supermarket-based bank, she’s inspired to coerce her A-squad besties (‘Kansas Hill’, a foul-mouthed rebel, played by Mena Suvari… ‘Cleo Miller’, a Conan O’Brien-obsessed stalker, played by Melissa George… ‘Hannah Wald’, a churchy virgin, played by Rachel Blanchard… and ‘Lucy Whitmore’, a Harvard-bound nerd, played by Sara Marsh), into robbing her employer’s safe the day after Xmas. Despite some initial hesitation, the girls quickly set about watching heist movies to refine their plan… though much of the necessary criminal nous is provided by Kansas, whose mother is a bona fide jailbird.* Her prison contacts point them towards a local dirtbag, who agrees to provide the “gats” they need to stage a convincing heist, if they allow his awkward, lank-haired daughter (‘Fern Rogers’, played by Alexandra Holden) to join their squad. 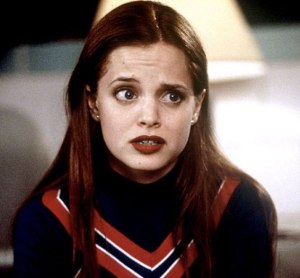 Overall, there are a few funny lines here and there, and the main cast put in very energetic and engaging performances, but the jokes lack the wit and insight they need to transcend their sourness, and the piss-poor twist ending is so weak, it drags everything that came before it down into a deep pit of disappointment and wasted potential. Meh.

* Her mother, ‘Mrs. Hill’, is played by Sean Young… but I’d strongly recommend that fans of her earlier work avoid this movie like the plague. It will only make you sad.