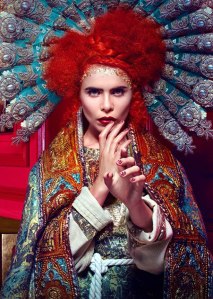 Although I greatly admire Paloma Faith as a personality and a performer, and think she has an incredible set of pipes, I have to say that her last album, Fall to Grace (2012), left me rather cold. It was just too grown-up and downbeat for my liking… especially after her crazy-fun, carnival-ride debut, Do You Want The Truth Or Something Beautiful? (2009).

She’s recorded some interesting collaborations/covers in the meanwhile, but now she has a cracking new single out, in anticipation of her upcoming third album (A Perfect Contradiction), and it’s got me excited all over again. As I’ve said before, I’m not great at writing about music, because I don’t really have the vocabulary for it… but “Can’t Rely on You” seems a damn sight funkier than any of the tracks on Grace, and I assume we have producer Pharrell Williams to thank for that.

Meanwhile, the video is a gorgeously gothic nightmare, in which poor Paloma finds herself being repeatedly betrayed/sacrificed by the men she’s trusted, before finally finding escape/solace in a brand new day. I’m all for fresh starts, so I’m greatly looking forward to the release of Contradiction, and the renewal of my fanboy crush on Faith. C’mon wid’ it!

A comic book writer with an interest in feminism, philosophy, and affirmative action. He/him.
View all posts by Dee CrowSeer →
This entry was posted in Rants about Music and tagged Can't Rely on You, Paloma Faith. Bookmark the permalink.
Loading Comments...