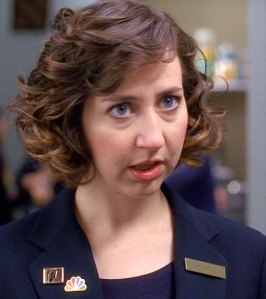 In theory, I should unequivocally approve of the casting of Kristen Schaal as a recurring character in the sixth season of 30 Rock… and I can’t deny that I enjoyed her work here as ‘Hazel Wassername’, a new NBC page who becomes Liz’s mentee and (eventually) Kenneth’s roommate-with-benefits… but playing a crazy-sexy stalker-type isn’t a huge stretch for her, and the faint taint of type-casting took some of the fun out of it. Several times throughout the season, characters made self-deprecating meta-jokes about the lack of racial diversity in the show’s main cast, and I couldn’t help wondering why they didn’t bring back ‘Grace Park’, Kenneth’s former flame (first/last seen in ep #1.14 , “The C Word”). At least there would have been some continuity there, on top of the diversity factor… though it’s possible Charlyne Yi would’ve been too busy appearing in House to participate… 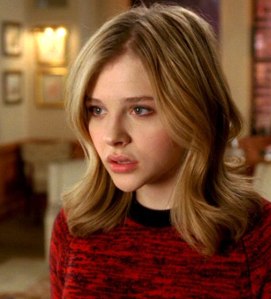 Besides Schaal (but not Yi), there were a number of other noteworthy guest-stars this season:  Mary Steenburgen appeared in numerous episodes (starting with #6.6, “Hey, Baby, What’s Wrong”) as ‘Diana Jessup’, Jack’s unnervingly attractive mother-in-law. Despite the ridiculousness of the circumstances, I actually found myself cringing at the thought of Jack cheating on his wife while she was still living in North Korean captivity. Thankfully the “affair” didn’t go any further than a quick (and very public) kiss… but it was still a deal-breaker, when the chips came down, and Avery came home. Sarah Schenkkan made a very eye-and-ear-catching appearance in ep #6.8 (“The Tuxedo Begins”) as a fresh-faced ‘Young Girl’ who arrives in New York sweetly singing her lungs out, before quickly achieving her innocent ambition of becoming a glammed-up prostitute. Yay? Ep #6.11 (“Standards and Practices”) saw the return of Chloë Moretz as Jack’s diminutive nemesis ‘Kaylie Hooper’… who, I’m happy to report, was just as manipulative and sneaky as ever. Still no Kung-Fu sadly, but she does deliver some awesomely incomprehensible teen-babbling, bless her. 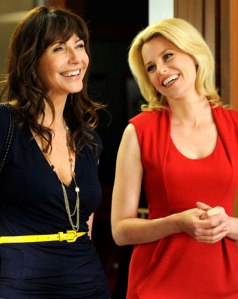 Cynthia Nixon appeared in ep #6.14 (“Kidnapped by Danger”) as “herself”, playing a fictionalised version of Jack’s former love interest ‘Nancy Donovan’, for a TV-movie written by Liz… which led to a neat little call-back to all the fuss over Julianne Moore’s outsized Boston accent. Bebe Wood appeared in ep #6.18 (“Murphy Brown Lied to Us”) as ‘Cat’, the adorably level-headed daughter of a corporate d-bag that Jack sets Liz up on a date with (knowing full well that meeting the tyke will rekindle his mentee’s interest in squeezing out a fresh Lemon of her own… as it were). Tangential griping: Still no sign of a New Normal DVD, dammit! Amy Poehler appeared in ep #6.19 (“Live from Studio 6H”) as ‘Young Liz’ in a couple of flashbacks… which I found slightly distracting/disappointing, simply because they didn’t bother to put a brown wig on her. Meh. And last, but certainly not least, Elizabeth Banks and Margaret Cho returned in ep #6.21, as America’s favourite odd-couple, ‘Avery Jessup’ and Kim Jong-Il (plus his son, Kim Jong-Un)… earning themselves an Emmy nomination each, into the bargain! Hurrah! Fun fact: Cho will be co-starring in one of Tina Fey’s new projects, a (currently untitled) multi-camera sitcom about a women’s college that begrudgingly opens its doors to male students for the first time. Sounds good!