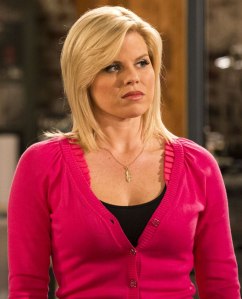 More sad news for fans of likable-but-unpopular sitcoms about gay dads: NBC has cancelled Sean Saves the World, and halted production of the remaining four episodes they’d previously ordered. Boo to them!

If I’m honest, my main motivation for watching the show initially was the presence of Megan Hilty, playing the eponymous single-father’s gal-pal and co-worker, ‘Liz’*… but I quickly came to appreciate Thomas Lennon’s scene-stealing work as their eccentric new boss, ‘Max’. By comparison, Sean Hayes was probably the weakest link in the cast, so it’s a shame they can’t retool the show with Max as the lead, somehow inheriting Sean’s daughter and raising her as his own… and maybe realising he was gay in the process, just to keep the premise as close to the original as possible…?

The show was never a gut-buster, but it could be quite amusing at times, and I’ll miss it now it’s gone. Not enough to try posting parakeets to the NBC offices or anything crazy like that… just enough to write this blog post about it.

* I was going to suggest the show might have been a bigger hit if they’d let Hilty sing more… but she sang all the time on Smash, and that got cancelled too. She doesn’t have a lot of luck with TV shows, does she?

A comic book writer with an interest in feminism, philosophy, and affirmative action. He/him.
View all posts by Dee CrowSeer →
This entry was posted in Rants about TV and tagged Megan Hilty, Sean Saves the World. Bookmark the permalink.