[Contains a surprising amount of heavy petting and SPOILERS!!!]

After the events of The Order of the Phoenix, I was hoping that Harry Potter and his chums had outgrown Hogswarts… but The Half-Blood Prince (2009) sees them all returning to the ill-starred school for some “puppy love” rom-com antics, with Hermione and Ron spiralling inexorably towards each other, and Harry breaking the “bro code” by macking on Ron’s younger sister, Ginny. Tut-tut! Meanwhile, The Death Eaters are plotting to infiltrate the school grounds via their sneaky (though fairly conspicuous) sleeper agents. Oh no! 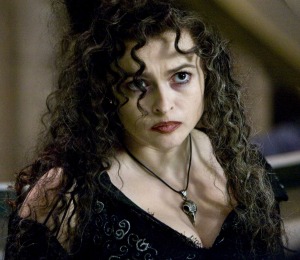 Overall, I really enjoyed this entry, despite its predominant focus on the Harry/Dumbledore dynamic, which I have so very little invested in. I realise I should feel sad that the “great” wizard gets deaded here, but I had so little respect/sympathy for the character as he’d been portrayed in these films, that I felt nothing more than mild amusement that he died for so little. I assume that readers of the books spend more time getting to bond with Dumbledore, and therefore find his death genuinely shocking… but for me it was simply the inevitable result of his unceasing incompetence. It probably doesn’t help that he spent the majority of Phoenix snubbing and blanking Harry in his hour of need, for reasons that were never adequately explained. As for his annual appointment of a new Secretly Evil “Defence Against the Dark Arts” Professor, I was intrigued to learn that in the book it’s suggested that a dejected Voldemort had somehow cursed the job, after his own application was rejected… which almost explains the pattern of post-appointment craziness, though it does make you wonder why Bumblebore (tee hee!) didn’t try to reverse the curse at some point, or simply make the position redundant! 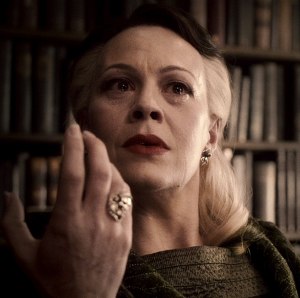 Another contributing factor to my dry-eyed apathy during the finale is that I was enjoying Helena Bonham Carter’s gleefully wicked turn as ‘Bellatrix Lestrange’ so much, I couldn’t help rooting for the baddies a little bit… they’re just so much more fun (and so much better dressed) than the full-grown goodies! Apparently the scene where they wreck up the Millennium Bridge wasn’t depicted in the book at all, though there were several references to the Death Eaters’ (off-page) rampages… and I thought this was a very smart move on the film-makers’ part, because it demonstrates that the conflict actually has consequences beyond the insular wizarding world. Likewise the invented scene where Bellatrix and her cronies lay siege to the Weasleys’ home helped to amp up the stakes, and spread the action around. Basically, the more Bellatrix the better, in my opinion! This entry also saw the introduction of Draco’s mother, ‘Narcissa Malfoy’, played by Helen McCrory… who had originally been cast as Bellatrix in Phoenix, but had to back out because she had a bun in the oven! Though I’ve always enjoyed McCrory’s work in the past, and think she does some great grief-stricken acting here, I can’t say I’m sorry that HBC inherited the larger part. 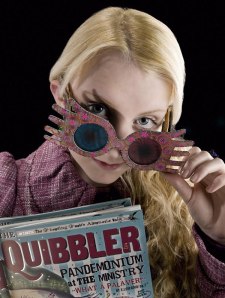 As for the film’s heroines… Evanna Lynch got some very funny scenes as the lovely ‘Luna Lovegood’, who also managed to save Harry’s bacon after a disastrous encounter with Draco on the train. In the book, this rescue was actually performed by ‘Nymphadora Tonks’ (Natalia Tena)… but she’d cut her hair and gone all wifey since the last film, so she was nowhere near as cool and punky as she used to be. Boo! As for Hermione… um… I did enjoy her “will they/won’t they” back-and-forth with Ron, and it gave Emma Watson a lot of different emotions to play, to flex her acting muscles, but her character was too busy fussing over boys to think clearly or contribute anything to the main storyline, as far as I could see. According to the credits, Afshan Azad, Shefali Chowdhury, and Katie Leung were also in the film somewhere, but I can’t say I noticed, sadly. So, no forgiveness for Cho this time around either! Poor thing.

Stray observation: I loved how cavalier Harry got after drinking the “Felix Felicis” luck potion, so a tip of the hat to Daniel Radcliffe for his performance there… though it did make me wonder why Dumbeldore didn’t have similar performance-enhancing drafts stored away, for use in life-or-death emergencies… tch!