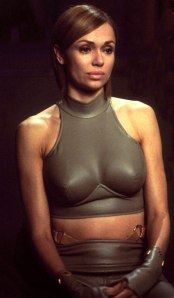 Over the past few months, I’ve been working my way through seasons three, four and five of Stargate: SG-1… but haven’t really had much to say about them. After a rocky start, the show settled into a comfy groove/rut, and just kept on churning out episodes in the manner of a fast-food burger chain. Every restaurant (season) looks a little different on the outside, but the burgers (episodes) taste exactly the same regardless… easy to chew, full of empty calories, mildly addictive, and strangely comforting.* Don’t get me wrong, I enjoy watching the show, but I never feel especially inspired or challenged or excited by it… and, as I say, there haven’t been many female guests stars worth blogging about, until now…

Ep. #4.03 (“Upgrades”) featured the first of three appearances by Vanessa Angel as a suspiciously shapely and tightly-clad Tok’ra scientist named ‘Anise’. According to Peter Deluise (a frequent director, writer, and producer for the show) the character was added in a bid to boost ratings, and replicate the popularity of Voyager’s ‘Seven of Nine’ (a role Angel had also auditioned for)… but then the producers decided the ratings were fine as they were, and dumped her like yesterday’s trash. Her final episode (#4.05, “Divide and Conquer”) is particularly amusing/eye-brow-raising, as she tries to put the moves on Jack, who chivalrously declines her offer of no-strings sex, after they share a kiss… which allows actor/exec-producer Richard Dean Anderson the opportunity to look all noble and gentlemanly on-screen, while also repeatedly snogging a smokin’ hot lady. Nice work if you can get it!

A couple of episodes later, Marina Sirtis appeared as ‘Dr. Svetlana Markov’, a Russian scientist working on a rival Stargate programme, operating out of a Siberian Airbase (#4.07, “Watergate”). Of course, since this is an American show, the Russkies are in desperate need of rescue by the Yanks… and it isn’t until the following season that anyone on the SG-1 team (specifically civvie archaeologist Daniel, in ep #5.14) notes how weird it is that the American military should be making so many potentially Earth-shattering decisions, without ever sharing their information or technological advances with anyone outside of their own country. Sadly, he doesn’t bother pursuing that line of thinking once the disaster-of-the-week has been averted (using the Russian’s dialling device, which is destroyed in the process, effectively ending their entire programme! But no one really comments on that, or apologises for it, because, uh… USA! USA!! USA!!!).

On a more affirmative kick, Grace Park appeared in ep #5.13 (“Proving Ground”) as ‘Lt. Satterfield’, a fresh-faced young recruit with a rather adorable crush on Daniel (they don’t make-out… but she does shield him from a fake bomb explosion, so that’s kinda romantic!). Suleka Mathew appeared in a two-parter as ‘Kali’, a Goa’uld System Lord named for the awesome Hindu goddess of destruction (ep #5.15/16, “Summit” and “Last Stand”). Sadly, she didn’t do very much here, besides nod and vote and bite into a CGI symbiote… but her character is featured in the spin-off Role-Playing Game, so she has quite a detailed backstory all the same! Danielle Nicolet appeared in ep #5.19 (“Menace”) as ‘Reese’, a super-cute robot girl in heavy denial about her true nature and culpability for the destruction of her home world. As the episode title so subtly suggest, she’s adorable but deadly! And finally, Christina Cox appeared in ep #5. 20 (“The Sentinel”) as ‘Lt. Kershaw’, a former agent with the NID (SGC-bating bad-guys), who was sorta responsible for sabotaging the eponymous defence system, thus leaving an entire alien planet vulnerable to attack. Tch! Apparently Cox also appeared in a second season episode (#2.13, “Spirits”), but she wore such heavy prosthetics, and her character kept changing into a wolf, so I didn’t even recognised her!

* There is one pretty major change to the status quo at the end of season five, when Daniel dies a heroic death while saving a planet from destruction, and then ascends to a higher plane of existence. I have to say, I was genuinely moved by this episode (#5.21 “Meridian”), and really wish that the show could have taken itself a little more seriously, and tried to reach those emotional and spiritual heights a little more often.

A comic book writer with an interest in feminism, philosophy, and affirmative action.
View all posts by Dee CrowSeer →
This entry was posted in Rants about TV and tagged Danielle Nicolet, Grace Park, Marina Sirtis, Seven of Nine, SG-1, Stargate, Stargate SG-1, Suleka Mathew, Vanessa Angel. Bookmark the permalink.
%d bloggers like this: