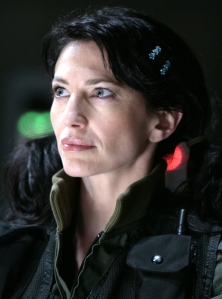 Although I felt the tenth season of Stargate: SG-1 came to a fairly satisfying conclusion with the (presumed) “death” of the Ori, their pesky Priors were still floating around the galaxy, spreading their pre-fab plagues and such… so I’m glad we got a sequel movie, The Ark of Truth (2008), to wrap up that whole, uh, arc. Obviously getting cancelled was never part of the producers’ long-term plan, so it’s easy to forgive a lot of the short-cuts and convenient “deus ex machina” interventions (courtesy of Sarah Strange’s ‘Morgan Le Fay’) that occured here, as they whipped through a season’s worth of plot points… though, considering the scant screentime they had to play with, I’m kinda pissed that they wasted so much of it resurrecting the Replicants, rather than fleshing out the relationships between Vala (Claudia Black), Tomin (Tim Guinee), and Adria (Morena Baccarin). Given a straight choice, I’d much rather see three established characters wrestling with their divided loyalties and star-crossed familial love, than yet more f*cking footage of anonymous extras shooting Lego-spiders in a corridor! Apparently writer-director Robert C. Cooper disagreed… presumably because it was quicker and easier to just copy and paste scene descriptions from a previous script (“They continue to fire their weapons down the corridor… dakka-dakka-dakka… the Replicants explode in a shower of blocks… repeat as necessary.”), than to write original, emotionally engaging dialogue. Feh! Of course Sam n’ Cam had to have something to do while everyone else was down on the planet searching for the Ark… but why did “Coop” have to bring back the second dullest villains in the entire Stargate canon for them to fight?*

As if that wasn’t irritating enough (and believe me, it was plenty irritating), a couple of Replicants then went and latched themselves to the spine of the shit-heel civilian saboteur who’d released them, thus turning him into a poor man’s Terminator. Double feh! This led to another of my pet peeves in action flicks/shows: when a supposedly well-trained shooter fires their weapon at a powered-up opponent… and, of course, they aim for the chest rather than the head because it’s easier for the FX team to put squibs there than anywhere else on the body, even though that’s also the most convenient place for someone to wear a hidden bullet-proof vest… and they see that the shots tear straight through the baddy’s body, leaving wounds that didn’t stop him… so they just give up, rather than firing directly at his face, and trying to blind him by busting up his eyes!!! GAH!!!

All that aside, I thought AoT was pretty enjoyable as a loose-end-tying encore, even if it lacked the humour and free-wheeling spirit of the seasons that directly preceded it.

Likewise, the second sequel, Continuum (2008), was inconsequential but fairly entertaining all the same. The time-travel stuff doesn’t really hold together if you think about it too hard, but seeing Ba’al tinkering with the timeline and reviving the Goa’uld System Lords was pretty refreshing after all those damn Replicant scenes in the previous instalment! Obviously I started getting antsy when Vala first vanished from the screen… but I was very glad when she reappeared (in the alternate timeline) as ‘Qetesh’, and I could start counting down the seconds until her inevitable betrayal of the suspiciously prescient Ba’al. And what a glorious turn it was! Not only did she literally stab him in the back, but she somehow managed to use her super-sharp sword to work the “god” like a ventriloquist’s dummy, and totally fool Teal’c into thinking all was fine, even as a trickle of blood was dripping down Ba’al’s chin! How fantastically macabre. I also enjoyed hearing Black’s vocal intonations filtered through the distorted Goa’uld voice-box thingy… and rather regret that we didn’t get to see more of this evil alter-ego during the series itself.

Behind-the-scenes-wise, I have to praise the grit and good humour of the crew-members and cast-mates (including plucky Amanda Tapping) who ventured up to a remote Naval Ice Station in the Arctic for a week, to film the impressive snowscape location shots. Personally, I would’ve voted for staying in a nice, warm-ish studio and playing pretend (like Michael Shanks did), but more power to them for being so intrepid!

And… er… I guess that brings me to the end of my televisual journey with SG-1.** Time to go fishin’!

* The dullest were the aptly-named “Drones” from SG:U. Yawn.

** Apparently there are a couple of audiobooks starring Vala and voiced by Black herself, which might be worth checking out sometime… she also had a spin-off comic, which could be fun (though I was disappointed by the poor likeness).