T’other day I happened upon an old USA Today video interview with Mayim Bialik and Melissa Rauch, in which they revealed that in real life they both wear thick glasses, much like their Big Bang Theory characters. I know that isn’t exactly front-page news, but it amused to think that the costumes they wear on that show are closer to how they look in everyday reality than when they’re playing themselves for publicity purposes. Since normal glasses also tend to reflect and cast glares under studio lights, I’m assuming that the ones they wear on TV are props… which means they must take off their own glasses in the dressing room, then put in contacts before they can pop the fake glasses on over them! 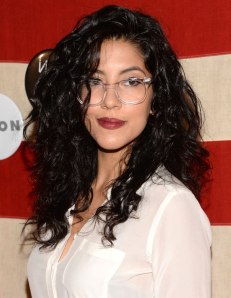 While we’re on the subject, it’s also worth noting that my latest sitcom-crush, Stephanie Beatriz, is also afflicted with a “really rough astigmatism”, requiring her to wear the thick specs she had on at this year’s Golden Globes. To quote an Indiewire interview: “I actually didn’t wear them on the red carpet, because I thought I should look glamorous. Then I get inside and sit down at the table, and two seconds later, Meryl Streep walks by in her glasses. I turned to Joe Lo Truglio and said “If Meryl’s wearing glasses, I’m going to wear mine!” So thanks, Meryl Streep!” Indeed. In a Hollywood Reporter blog about dressing for the Emmys back in 2012, Bialik briefly debated wearing her glasses for the ceremony, but decided against it because she didn’t think her stylist would approve… which seems a shame, but if the shiny lenses are going to cause problems (such as glare or distortion) when being photographed/ filmed, it’s really more of a practical consideration than a style choice, I guess?

A comic book writer with an interest in feminism, philosophy, and affirmative action. He/him.
View all posts by Dee CrowSeer →
This entry was posted in Rants about TV and tagged Mayim Bialik, Melissa Rauch, Meryl Streep, Stephanie Beatriz, The Big Bang Theory. Bookmark the permalink.