Too Bad (Better To Come?) 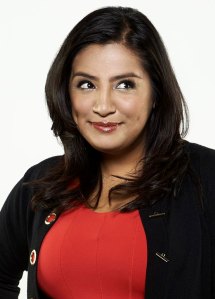 In last week’s episode of Bad Teacher, the characters found themselves facing a teacher-evaluation day, with the threat of budget-tightening redundancies hanging over their heads. They all managed to pass muster and hang on to their jobs (phew!)… but the cast and crew of the actual show weren’t quite so lucky, as CBS have announced that they’re axing its ass after just three episodes. Ouch. I can’t say I’m surprised, because it really was an ill-conceived and unfunny shambles from start to finish… but I will mourn the absence of Ari Graynor from my screen… at least until she scores another (hopefully more rewarding) gig.

Meanwhile, there’s the tantalising promise of all the shiny new sitcoms that will be debuting over the vaguely-defined “2014-2015 season”:

Cristela, starring stand-up comedienne (and co-creator) Cristela Alonzo as a Latina law school graduate trying to balance her job as an unpaid intern at a fancy law firm with the demands of her disapproving family. [ABC] 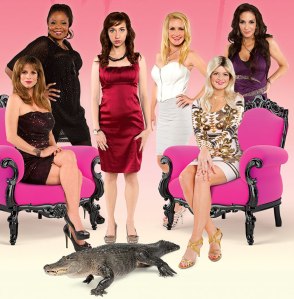 Girl Meets World, a sequel to the long-running (and fondly remembered) Boy Meets World, which aired from 1993 to 2000, starring Rowan Blanchard as the teenage daughter of that show’s main characters Cory and Topanga Matthews (Danielle Fishel). [Disney Channel]

Married, starring Judy Greer and Nat Faxon as a married couple who do married couple stuff… and co-starring Jenny Slate as (I’m guessing) Greer’s sassy best friend? The premise sounds kinda meh, but the cast is solid, so I’ll be checking it out anyway. [FX] 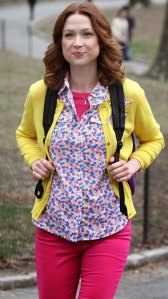 Unbreakable Kimmy Schmidt (formerly known as “Tooken”… which was a funnier title, but probably a bit too silly for some tastes), starring uber-adorable Ellie Kemper as a former doomsday cultist, trying to start her life over again in New York. It’s potentially quite a dark premise for a comedy, but Tina Fey’s co-creator/writer credit is your guarantee of smart jokes and big laughs. [NBC] 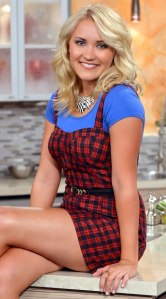 Younger, starring Sutton Foster as a 40-year-old single mother, who decides the only way for her to break back into the job market is to make herself over as a twenty-something (!). M’kay. Co-starring Hilary Duff, Debi Mazar, and Miriam Shor (double yay!!). So, a pretty dicey premise… but an awesome cast! [TV Land]

And finally… Puppy Love, a British sitcom starring co-writers Joanna Scanlan and Vicki Pepperdine as two women dealing with “obstinate dogs, impossible teenage kids and depressing husbands”. I’ll be honest, after my initial enthusiasm for Getting On, I checked out sometime around the start of the third series, when the ennui started weighing too heavy on my heart… but my fondness for Pepperdine as an actress remains undimmed, so I’m looking forward to seeing what she and Scanlan have come up with this time around. As long as it doesn’t involve too many stool samples and dying relatives… [BBC]

1 Response to Too Bad (Better To Come?)