This Bank Holiday, Ch4 were nice enough to screen Dr. Dolittle: Million Dollar Mutts (2009), thus allowing me to complete my viewing of the entire Dolittle Quintology without having to splash out for the DVD on import. So yay for that!

In this instalment, ‘Maya Dolittle’ (Kyla Pratt) is frustrated by the fact that it will supposedly take seven years of hands-off, library-based study for her to become a fully-qualified veterinarian, and fulfil her dream of helping animals full-time… so she leaps at the chance to jet off to Los Angeles in the company of a glamorous celebutante heiress (Tegan Moss), to do a little freelance animal-whispering before her first term of college begins. Separated from her mother (Karen Holness), and dazzled by the glitzy Hollywood lifestyle, she sells her soul to a sharky agent in return for Reality TV stardom. Boo!

Without wishing to damn this straight-to-DVD sequel with faint praise, I was pleasantly surprised by how not-terrible it was! It’s been a long time since I saw the original movies, so I can’t really make a comparison, but there were plenty of jokes here that amused me (usually the off-colour comments made by the talking animals… such as when Lucky the dog brags to a lady-dog that he “puts the lick in frolic!”), and nothing that out-right bored me or moved me to anger. It’s lightweight fluff f’sure, but its heart is in the right place, and the pace is pretty brisk. “Cheap and cheerful”, seems to be the order of the day.

That said, there were some pretty glaring plot-holes that I feel duty-bound (or possibly autism-bound) to point out: First of all, everyone seemed way too blasé about the fact that Eliza’s family can magickally talk to animals! When she meets her hunky love interest in a nightclub, he expresses disbelief about her power, as if this is the first time he’s ever heard of such a thing, despite the fact that she was featured in a TV news report in the opening sequence*, and worked for the President of those United States in the previous movie (not to mention all of the important work her father is supposedly doing around the world, off-screen). So, either he just woke up from a five year coma, or that’s some sloppy-ass writing. Also, during the initial pitch meeting for her TV show, the scene plays as if the network executive is the one holding all the cards, and free to make any format changes he wishes, when in reality a super-cute critter-decoder like Eliza would be deluged with offers from competing networks, and be in a much stronger position to negotiate.

Speaking of which, the most glaring plot-hole involves the contract she supposedly signs with her secretly-evil agent… despite the fact it had been established earlier in the movie that Eliza was only 17, and years of watching Judge Judy have taught me that a minor cannot legally enter into a binding contract. So all that creepy cackling about how he “owned her” was straight-up bullshit! Which I’d be more inclined to overlook, if it hadn’t led to an interminable and unfunny chase around the studio lot, with various pets pursuing the agent while he clutches the rolled up contract like a relay-race baton… all while Eliza’s mom waits in the wings, only to reappear when she’s least needed, and everything has already been resolved. Tch! Really, the story about Eliza succumbing to temptation, then rediscovering her soul-purpose with the help of her furry friends (and the support of a loving man), should have been enough to fill the run-time by itself. All of that running and flailing around in the finale was just poop on the cake. 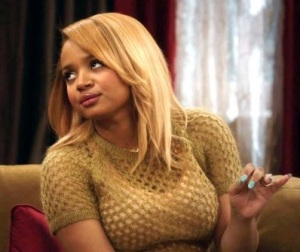 Out of curiosity, I checked out the latest episode of Let’s Stay Together, a rom-com series airing on BET, which co-stars Pratt as a college-student cousin of the main characters. I know it’s wrong to judge a whole show on the basis of a single, randomly-selected episode, but to me it seemed more like a daytime-soap-opera-with-a-laugh-track than a straight-up sitcom, and I won’t be going back for seconds anytime soon. Pratt’s storyline involved her character getting so caught up in on-campus protests that she completely forgets to attend her mid-term exams, and flunks out of school! Pretty dumb, eh? For the record, she’s also blonde on the show… which I only mention because her character made a crack about how much hassle it must be to maintain the natural afros that old-school activists like Angela Davis sport. More hassle than straightening your hair and dyeing it? Unlikely.

* Featuring an all-too-brief cameo by Elizabeth Thai as a ‘Reporter’, shooting her beauty straight down the barrel of the camera. Hotcha!