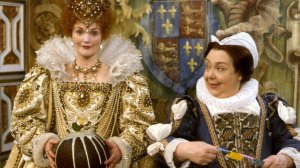 According to various sources, the actress Patsy Byrne passed away on Tuesday, at 80 years of age. Besides her recurring role as Malcolm’s snobbish mother in Watching, she’s probably best remembered for playing ‘Nursie’ (aka “Bernard”) in the second series of Blackadder, and two subsequent specials*. Miranda Richardson’s radical take on Queen Elizabeth I (aka “Queenie”) remains one of comedy’s greatest creations, and Byrne played an important part in all of her best scenes, as a rambling, udder-obsessed reminder of the monarch’s most embarrassing childhood moments. Of course, this sad news comes just a week after the announcement of Rik Mayall’s death, meaning a double blow for colleagues and fans around the world. To steal a line from Shakespeare (by way of Lady Farrow): “May flights of angels sing thee to thy rest”…

* Blackadder’s Christmas Carol and Blackadder: Back & Forth

A comic book writer with an interest in feminism, philosophy, and affirmative action. He/him.
View all posts by Dee CrowSeer →
This entry was posted in Rants about TV and tagged Blackadder, Miranda Richardson, Patsy Byrne, Queen Elizabeth I, Watching. Bookmark the permalink.
Loading Comments...