That Girl’s On Fire (Again!) 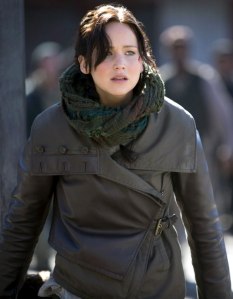 I was lucky enough to snag a half-price copy of The Hunger Games: Catching Fire (2013) on Amazon, and I’m still stoked about the bargain, even if the film itself was a bit of a let-down. Apparently the prep period between the two films was quite short, so director Gary Ross chose to sit this one out, prompting the producers to replace him with Francis Lawrence, of Constantine and I Am Legend fame (neither of which are regarded as particularly faithful, fan-pleasing adaptations of their source material). I know this is probably subjective, but as someone who hasn’t read the books and can’t fill in the blanks for himself, there seemed to be far more plot compression and beat-skipping this time around… all leading up to a rather lacklustre dribble of a cliff-hanger “ending”. It’s perfectly possible that I’ll warm to this film more in retrospect, once I’ve seen the final two chapters of the series and can appreciate it as part of a larger story… but judging it purely as a sequel to the first film, I’d say it was a damp squib, despite several moments of sharp humour, tragedy, and mind-f*ckery. 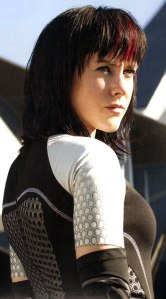 Of course, there’s no faulting Jennifer Lawrence’s performance in the lead role… she’s still an incredibly beautiful and brilliant young actress, ably holding her own against such cinematic heavy-weights as Donald Sutherland, Woody Harrelson and the late, great Philip Seymour Hoffman. Elizabeth Banks also got to show more range this time around, as Effie let her effusive mask slip to reveal the depth of her affection for Katniss and Peeta… while Willow Shields gracefully took on a larger role as the supportive younger sister. As for the new additions, President Snow’s devious plan to draw all the tributes from a pool of surviving victors resulted in a wider range of actresses appearing in the competition section, including: Lynn Cohen as silver-haired senior ‘Mags’… Amanda Plummer as gawky genius ‘Wiress’… and Jena Malone as punky loose-cannon ‘Johanna’. It’s always great to see Plummer scoring some screen-time (rather than just shouting at me through my speakers, every time I play the Pulp Fiction soundtrack) but Johanna was probably my fave new character overall, with her devil-may-care attitude, sweary outbursts, and random public strip-teases (though the best part of that scene for me was the disgusted expression on Lawrence’s face).