Leave Your Brain @ The Door 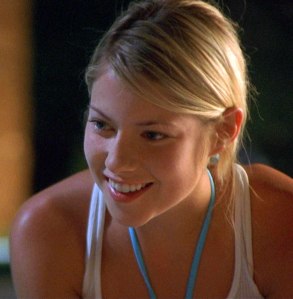 Before Cruel World (2005) begins, there’s a warning that viewers should expect “strong sadistic violence” to follow… but really, I would have preferred a heads up about all the witless stupidity to follow. The story starts dumb, and just gets dumber and dumber as it goes along, frittering away a potentially great premise on inept, slash-by-numbers schlock.

The DVD also has an extremely misleading cover, which gives top billing (and a large close-up image) to Jaime Pressly, despite the fact her character is killed off within the first fifteen minutes, and only pulled out later for a brief posthumous encore. Tch! She plays ‘Catherine “Cathy” Anderson’, the star/prize in a “reality dating” show called Joe Average, in which a bunch of unsuspecting schlubs competed for her “affections”, little suspecting that the producers are going to wheel in a hunky slab of beefcake to overshadow them and win her “heart” as a final twist. The story kicks off when one of the losers of that show (a depressingly puffy and careless Edward Furlong) returns to the house where his public rejection was recorded, which Cathy and her new hubby won as part of their prize (and which still retains its handy-dandy spy cameras and expensive editing bay!) Long story short, he kills the pair of them, and uses their house as the location for a deadly contest of his own devious devising, tricking a bunch of fame-and-fortune-seeking college students into competing against each other in an increasingly dangerous series of tasks.

I did get a chuckle out of the implication that there are only a couple degrees of separation between voyeuristic serial killers and mind-f*cking reality-TV producers… but, as I say, the writers never do anything particularly funny or thought-provoking or surprising with this satirical conceit, and the rules get very sloppy, very fast. There’s also no way the dude could have set everything up as slickly as it appeared, considering how sloppy and unstable he is, with only his mentally-challenged bruiser of a brother to help him out. Credulity is stretched even further by the way that the editing and direction fudge the timeline, with characters sometimes appearing to be in two or more places at once, wearing completely different outfits!

This horror “comedy” was only on my list in the first place because it’s one of the five credits on Sanoe Lake’s acting resume… but sadly her character is the first to figure out that there’s something fishy going on, and therefore the first one to die. She exits somewhere around the thirty-six-minute mark… and that’s just a sorry waste of her super-cuteness and laid-back surfy charms, dammit!

As much as I hated the stupit story, I have to say that all the actors playing the contestants really put the effort in, and brought their characters to life. The scenes where they were just hanging out together and flirting/rejecting each other were very natural and fun… so kudos to supporting actresses Susan Ward and Aimee Garcia for that… and mucho kudos to Nicole Bilderback, who also got a nail-biting fight/chase scene as the ass-kicking ‘Mikko’. Is it a teeny bit stereotypical to make the shy Asian girl a secret mistress of martial arts? Probably, yes, but it did get my hopes up that she’d be the “final girl” survivor, considering how hard she fought to escape… though that honour eventually fell to the far less fight-y ‘Jenny’, who used her feminine wiles to drive a wedge between the two blood-thirsty (and blonde-thirsty) brothers. Based on her performances here and in She’s The Man, I’ve come to the conclusion that Laura Ramsey is actually a very good actress… but I’ve yet to see her in a genuinely good movie! Ah well, maybe the sequel will be better…?*

* Er, that was a joke based on the bullshit end scene, with its “one year later” suggestion that the brothers were invincible killing-machines who’d continue to haunt Jenny and other random young people through numerous sequels. Thankfully, everyone seems to agree that this was a terrible, terrible movie, so I doubt we’ll be seeing a follow-up anytime soon… phew!