May The Swartz Be With You

Although I’m working on a Fantasy/S&S comic-book script right now, and don’t have to worry too much about historical accuracy and anachronisms, I have been reading about how some famous period films have made old-timey London seem much whiter than it actually was. Consequently, I was curious to check out the 2004 adaptation of William Makepeace Thackeray’s Vanity Fair, directed by Mira Nair (of Monsoon Wedding fame), and co-starring Kathryn Drysdale. 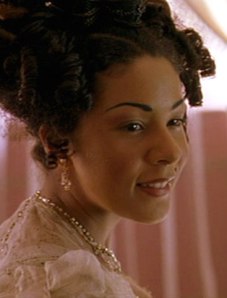 Cultural issues aside, I thought the film suffered heavily from The Curse of Compression*, compounded by the fact that the main cast barely seemed to age, even as their offspring grew from bumps to babies to teenagers! I haven’t read the original novel, but I gather that it was intended to be quite a scathing satirical “sketch” of English high society, and that the main character, ‘Becky Sharp’, was an unsympathetic anti-heroine. Although she’s apparently been softened quite a bit for the screen, I still found it very hard to care about her, and can’t help thinking it might have been more fun if they’d played up her “devilish” side a little more? Nair and her lead actress, Reese Witherspoon, both seem convinced that Becky is a feisty, proto-feminist go-getter we can all identify with, but her main goal seems to be to claw and scheme her way to the top of the class ladder, simply for the sake of it. Despite being told that there’s nothing really worth having behind the doors they shut in her face, she’s determined to be part of an elite inner circle and hob-nob with women who openly despise her… which just seems idiotic to me. If she’d simply been a gold-digger, I might have had more sympathy, but what she’s chasing seems so intangible and empty to me. On the commentary track, Nair sometimes refers to Becky falling in “love” or having her heart “broken”, but I never felt that she genuinely cared about any of the men that she hooked up with. She did seem quite affectionate and supportive towards her gal-pal ‘Amelia Sedley’, played by Romola Garai (who did fine work with a rather weak character), and even helped nudge her towards a happy ending… though her interest in Amelie’s brother, ‘Jos’ (Tony Maudsley), never came across as anything more than a convenient compromise. Meh. 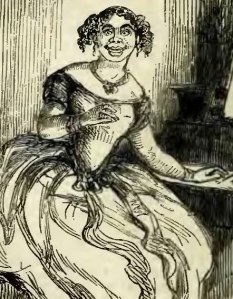 But back to the supposed topic of this post: Despite a few brown-faced extras in the crowd scenes, and several sequences set (and filmed) in India, the only non-white character with any real dialogue was Miss ‘Rhoda Swartz’ (Drysdale)… who only gets one short scene in which to shine, as an alternative prospect for Amelie’s intended, before being snubbed and exiting the story, never to be seen or heard from again. According to online snippets I’ve read from Jennifer DeVere Brody‘s book Impossible Purities: Blackness, Femininity, and Victorian Culture, Rhoda is first introduced in the original novel as a classmate of Amelie’s, and was prominent enough to appear in three separate illustrations, drawn by the author himself… although she generally exists to be observed by other characters, and doesn’t speak up for herself very often. She’s described in the text as a “rich woolly-haired mulatto from St. Kitt’s… Her father was a German Jew – a slave-owner they say – connected with the Cannibal Islands in some way or other”… though her ethnicity is generally a secondary consideration in the eyes of the avaricious snobs and social climbers around her, overshadowed by the enormous wealth that she’s inherited, and the sizeable dowry she has to offer. Sadly, on the screen at least, she seems just as superficial and unsympathetic as her paler peers, but I still think it might be interesting to read an account of events written from her unique perspective… especially if it led to Drysdale getting a starring role in the movie version!

* Apparently the BBC made a five-hour-long miniseries of the novel in 1998, co-starring Vicki Pepperdine, Joanna Scanlan, and Eleanor Bron, so I may have to check that out at some point!

3 Responses to May The Swartz Be With You