As a Brit, I wasn’t able to watch the Emmy Awards ceremony this week (or rather, I couldn’t be bothered downloading the whole thing, just for a few moments of interest), so I’m grateful to HelloGiggles for posting a handy summation of all the female-centric highlights… including Sarah Silverman spicing up an otherwise inane “What’s in your purse?” red carpet interview by revealing her trusty pot-vaporiser-pipe-thingy, before going on to win an award for her We Are Miracles special. Thankfully, Emmy winners aren’t obligated to undergo drug-tests after leaving the stage the way athletes are, so we’ll never know exactly how high she was (on adrenaline or otherwise) when she made her acceptance speech. 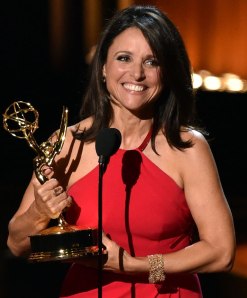 Meanwhile, Julia Louis-Dreyfus won a third consecutive Emmy for her sterling work in Veep… but before she could collect her award, she was briefly delayed by former co-star Bryan Cranston, who insisted on passionately kissing her as the pay-off to a gag they’d set up earlier in the evening (while presenting Jim Parsons with his Best Comedy Actor award), when JLD pretended not to remember their characters dating/kissing on Seinfeld, back in the day. Fun fact: Last year JLD broke Lucille Ball’s record of thirteen noms, and is currently the most nominated comedic actress in the awards show’s history! Yay her!

Update (28/8/14): Yesterday Big S tweeted that “It’s silly that having a puff of legal pot at the end of the night is news amongst a sea of scary drunk people”… which is fair enough, but cannabis is still an illegal “Class B” drug here in the UK, so it did seem kinda shocking to see her flaunting a hash-pipe on the red carpet of a fancy awards ceremony. As far as I can tell, the number of states and countries where cannabis is legal/tolerated is vastly outnumbered by the states and countries where it isn’t… so, yes, to the majority of people living outside of those pot-spots it’s still a noteworthy occurrence, if only for its rarity.