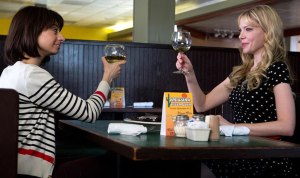 Ari Graynor made a guest appearance on Garfunkel and Oates this week*, moving me to write about a show that I’ve been feeling fairly apathetic about up until now. As far as sitcoms about musical-comedy-duos go, I think G&O comes a poor third to Flight of the Conchords and The Mighty Boosh, largely because those shows had such a strong supporting cast to flesh out the world around the main characters… in fact, the non-headliners often got the best jokes and upstaged the supposed stars, who were more than happy to cede the spotlight for a scene/song or two. Riki Lindhome and Kate Micucci, on the other hand, are intent on making G&O all about them… there are no other recurring characters or consistent settings here… just the two of them bantering away (or performing) in a variety of locations, and bouncing off an array of day-players. While Conchords had a wealth of self-deprecating Kiwi-sploitation material to mine, and Boosh had a uniquely surreal aesthetic, this show has no real identity beyond the personas of its two lead actresses. And that’s fine, as far it goes, because they’re both attractive, appealing, and talented performers… but it takes more than that to make a great sitcom. You need to create an engaging gang of proxy-friends (and frenemies) that audiences are aching to hang out with for half an hour every week… and G&O is simply too busy stroking its stars to bother with that sort of world-building.

On the musical side of things, I also have to say there’s something about their songs that I find very off-putting… I’m not sure if it’s the unison close-harmonies, or the wordy lyrics, or the affected faux-tweeness… but again, both the Conchords and the Boosh were far more experimental with their songs, pastiching a wide variety of musical and lyrical styles, which were often mini-stories in themselves and reflected the characters’ shifting emotional states and self-images. They weren’t all just wry, detached observations, sung in the same chirpy style, dammit!

Er… as an alleged feminist, it feels wrong to be making these comparisons and saying that the shows with male leads were better/funnier… though I think it’s worth noting that all of G&O’s episodes have been directed by a dude (Fred Savage, in fact) and half of them have been written by men, so it’s not really a strict gender split.

* She played ‘Cornish’, a glamourous and successful Hollywood actress, who was still inexplicably bitter about being kicked out of the group back when they were a trio, and vowed to make their lives hell as a “bandiversary” gift to her betrayers. As expected, Graynor was absolutely hilarious and played the vengeful diva role to the hilt, bless her. (ep #1.6 “Third Member”)

A comic book writer with an interest in feminism, philosophy, and affirmative action. He/him.
View all posts by Dee CrowSeer →
This entry was posted in Rants about Music, Rants about TV and tagged Ari Graynor, Flight of the Conchords, Garfunkel and Oates, Kate Micucci, Riki Lindhome, The Mighty Boosh. Bookmark the permalink.