On Saturday, Goodwill Ambassador Emma Watson delivered a speech at the United Nations headquarters, to mark the launch of the HeForShe gender equality campaign, which aims to mobilise men against gender inequalities. A full transcript of her address can be found at E! Online, but I thought I’d cherry-pick a couple of choice quotes for this post:

“I was appointed as Goodwill Ambassador for U.N. Women six months ago and the more I’ve spoken about feminism, the more I have realized that fighting for women’s rights has too often become synonymous with man-hating. If there is one thing I know for certain, it is that this has to stop… for the record, feminism, by definition, is the belief that men and women should have equal rights and opportunities. It is the theory of the political, economic and social equality of the sexes…”

“Gender equality is [a male] issue too. Because to date, I’ve seen my father’s role as a parent being valued les by society despite my needing his presence, as a child, as much as my mother’s. I’ve seen young men suffering from mental illness, unable to ask for help, for fear it would make them less of a men – or less of a man. In fact, in the U.K., suicide is the biggest killer of men, between 20 to 49, eclipsing road accidents, cancer and coronary heart disease. I’ve seen men made fragile and insecure by a distorted sense of what constitutes male success. Men don’t have the benefits of equality, either.” 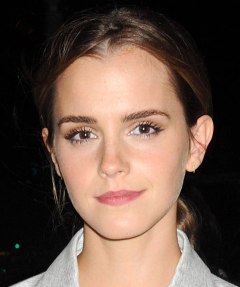 “It is time that we all see gender as a spectrum instead of two sets of opposing ideals. We should stop defining each other by what we are not and start defining ourselves by who we are… I want men to take up this mantle so their daughters, sisters and mothers can be free from prejudice but also so their sons have permission to be vulnerable and human, too and in doing so, be a more true and complete version of themselves.”

A comic book writer with an interest in feminism, philosophy, and affirmative action. He/him.
View all posts by Dee CrowSeer →
This entry was posted in Rants about Ads and tagged #HeForShe, Emma Watson, Feminism, He For She. Bookmark the permalink.
Loading Comments...