It probably isn’t fair to compare Gotham, which just kicked-off its highly-anticipated first season, and Agents of S.H.I.E.L.D., which recently returned for a second helping… but fanboys-and-girls have been playing the “DC or Marvel” game since time immemorial, and who am I to defy such a long-standing tradition? 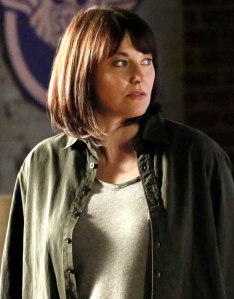 After only two episodes, I’m already starting to tire of AoS again. First of all, there was a flashback scene featuring a bunch of characters from a movie I’ve yet to see, so I couldn’t help feeling a little left out… then they introduced a kick-ass mercenary played by Lucy Lawless, only to kill her off before the end of the premiere episode! And then there’s all the tricksy twists which have become a trademark of Whedon-esque storytelling, but they seem to have lost their ability to shock or thrill me now. I mean, it’s not as if I guessed ahead of time that the ‘Simmons’ (Elizabeth Henstridge) we saw on-screen in the first episode might be a figment of ‘Fitz’s (Iain De Caestecker) addled imagination, it’s just that when the truth was revealed all I could do was shrug and roll my eyes. Objectively, I can see it was quite a clever ruse… but it’s like if you had a friend who was always pranking you – one month he pretends he’s totalled your car, the next he pretends he’s won the lottery, then he pretends he’s dying of some scary disease – no matter how much time, effort, money, and skill he put into pulling those elaborate hoaxes, eventually you’d just stop taking his phone-calls, because you’re tired of the mindgames and manipulation! Can unpredictability become predictable? Maybe not… but it can get quite frustrating after a while. Sometimes you just want characters to be who they appear to be, and for them to live long enough (or keep their sanity long enough) to find some kind of happiness or peace! Unfortunately Joss Whedon’s shows tend to punish viewers for forming emotional attachments to his characters… which means that I’ve become wary of ever really trusting or caring about them… which in turn dulls the impact of all the twisty reveals and heel-turns. Meh. 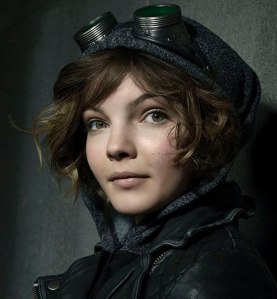 So, in that sense, there’s something very reassuring about Gotham, which tells the well-worn story of ‘Bruce Wayne’s (David Mazouz) childhood trauma and his slow “evolution” into the brooding, bat-crap-crazy vigilante that comic book fans and cinema audiences know and love. The personality traits, allegiances, and general fates of the major players are already fait accompli public knowledge, so there’s less danger of too much sneaky rug-pulling along the way, as the series sets about telling meat-and-potato crime-of-the-week stories. Although the pilot episode was overstuffed with fan-service cameos (to the point that every scene seemed to introduce yet another future-villain-in-the-making), the hook of seeing so many iconic characters in their infancy holds a lot of appeal for me.* From an affirmative action stand-point, I also appreciate how many powerful (and sexually ambiguous) women-of-colour there seem to be in Gotham… including Victoria Cartagena as ‘Renee Montoya’, a detective with the Major Crimes Unit… Zabryna Guevara as ‘Sarah Essen’, Captain of the GCPD’s homicide squad… and Jada Pinkett Smith as ‘Fish Mooney’, an ambitious mob boss with an unfortunate name. I also got a kick out of the fact that the first character we met in the pilot was a teenaged ‘Selina “Cat” Kyle’ (Camren Bicondova), who went on to witness the murder of Mr and Mrs Wayne, before showing her mettle as a feisty, streetwise anti-heroine in the second episode, when she (and a bunch of random street kids) were captured by a suspiciously clean-cut child-catcher (Lili Taylor)! Oh, and the same ep also featured a great cameo by Carol Kane as the oblivious mother of ‘Oswald Cobblepot’ (Robin Lord Taylor), an exiled snitch-turned-psycho-killer who’s shaping up to be one of the season’s most entertaining antagonists.

I guess my point is that while AoS may be the smarter show, in theory, it’s a little too smart-alecky for its own good sometimes… whereas Gotham is unpretentious pulpy fun, and because it’s all about origin stories, you don’t have to watch a bunch of associated movies (or webisodes) to understand who everyone is or what they’re about. It’s a much more self-contained experience, and far more satisfying for that… though I accept that I could be whistling a very different tune a few months from now!

* Although my fave Gothamite, Harley Quinn, is more of a second generation character, and probably hasn’t even been born at this point in the city’s history!

3 Responses to Eagle Vs. Bat