The fifth season of Ally McBeal (2001) was the lowest rated (and least award-nominated) in the show’s history… and while I can’t claim to know what makes a TV series a hit with the American public and critical elite, I can call out some of the factors that made this season one of the most disappointing and repellent for me:

1) No Larry… or at least, no real-life Larry. He does appear in a few brief fantasy sequences, but it looked like Robert Downey Jr. was filmed separately in front of a green-screen, and his supposed scenes with Ally (Calista Flockhart) were actually staged with doubles. Whether or not you choose to believe in the concept of romantic soul-mates, the fact remains that Larry was the most serious and compelling love interest that Ally ever had, and there was no way anyone could follow that, or recreate the chemistry that Flockhart and Downey shared on-screen. Maybe if Jon Bon Jovi’s character, ‘Victor Morrison’, had just been an easy-going, down-to-earth handyman, he might have made a decent foil for our high-strung heroine… but instead they made him such a shameless buttinski, and never explained where or how he gained his infallible (almost super-human) intuition when it came to parenting… so we just had to suffer through scenes of him constantly undercutting Ally and setting her right, without ever admitting any flaws or mistakes of his own. Even when he decided to humour a deluded old lady (Shirley Knight) who mistook him for the spirit of her deceased lover, she ended up dying off-screen before he ever had to face the consequences of his ridiculous charade. Gah!

2) No Renée… until the final episode (#5.22, “Bygones”). Sadly, Lisa Nicole Carson had to retire from acting for health (and/or legal) reasons around this time, so her character simply vanished without explanation, only to return in the finale to say good-bye to her estranged gal-pal, and have a good old-fashioned singing/shoving-match in the bar with Elaine (Jane Krakowski). Hurrah! Fun fact: Carson also had a cameo as Renée (now Judge Raddick) in the series finale of David E. Kelley’s subsequent series Harry’s Law (2012). 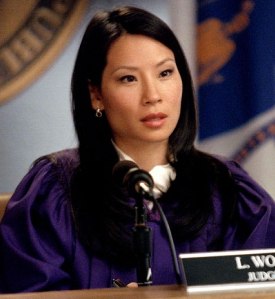 3) The relative lack of Ling… who had some great scenes in the earlier episodes, where she’s called to serve as a judge overseeing small claims cases, and quickly becomes the star of her own reality TV show… but her appearances tailed off after that, and she wasn’t in the second half of the season at all. Apparently Lucy Liu was busy filming Charlie’s Angels: Full Throttle at the time, which explains her absence… although that was a pretty lousy movie, and her sub-plot was a particularly cringe-worthy low-point, so maybe she would’ve been better off going down with this sinking ship instead? On the plus side, her void was filled by Christina Ricci as ‘Liza Bump’ (aka “Lolita”), a coquettish legal prodigy who used her petite, wide-eyed innocence to devastating effect both in and out of the courtroom! Ricci recurred in seven episodes (starting with #5.16, “Love is All Around”), and gave what could’ve been considered an Emmy-worthy performance in one of the show’s stronger seasons. Either way, she made me laugh.

4) The over-exposure of “Dame Edna Everage” (aka Barry Humphries) as ‘Claire Otoms’, who featured in twelve “acid-reflux”-filled episodes! Personally, I’ve always found Everage funny as a celebrity guest and talk-show hostess… but seeing her playing a character in a show like this was just far too distracting, because her persona is so large it overpowers everything else… and giving her a repulsive character tic, which makes her look/sound like she’s about to vomit every time she gets nervous, didn’t exactly take the curse off it. While I’m sure Humphries has a pretty loyal fanbase, I can’t help thinking that the presence of a large, leering, purple-haired grotesque making sexually suggestive comments and threatening to throw-up, may have been a bit of a turn-off for a lot of viewers. It certainly was for me.

5) The first three episodes didn’t even seem to be part of the same show we’d come to expect over the previous four seasons… which was kinda disorienting. For one thing, there weren’t any cases-of-the-week, just an on-going class-action suit (involving Claire as the named plaintive), and Ally barely had any fantasies or wacky dreams. We also spent an inordinate amount of time with a trio of new characters, which included Josh Hopkins as ‘Raymond Millbury’ and James Marsden as ‘Glenn Foy’, two burger-chomping bros, who actually danced in the bar wearing backwards baseball caps with their business suits! WTF!? Raymond also ended up working at Cage & Fish eventually, but ironically he seemed to get far less dialogue and screentime once he had a legitimate reason to be hanging around the office, instead of just popping in to see his buddy! I guess that’s because Ally banned him from saying anything sexist or derogatory, which was really the essence of his “character”? In ep #5.4 (“Fear of Flirting”), they tried to sell the idea that he simply adopted a piggish persona to gain the edge over female attorneys in court… but that doesn’t really explain why he maintained that persona in his everyday interactions with men and women alike. To paraphrase an old maxim, “if it looks like a pig, and oinks like a pig, it probably is a pig”… and if you spend roughly seventy percent of your day being a chauvinistic a-hole, then who cares how kind and sensitive you are the other thirty percent of the time?

6) Meanwhile, Glenn was embroiled in a love triangle with Ally and her perky protégé ‘Jenny Shaw’, played by Julianne Nicholson. Personally, I was a fan of Jenny, and I enjoyed the sisterly vibe between her and Ally… but using her to recycle the old “Can two former lovers work together?” plotline with Glenn, was probably a mistake… I mean, it wasn’t all that interesting the first time around with Ally and Billy, so why revisit it now? Both characters were written out mid-way through the season… and personally, I thought it was a little cruel to have Nicholson play a comedy scene in which she’s being fired and crying pitifully, when she was also being fired in reality. Salt in the wounds, much? Thankfully, she bounced back and has since gone on to land recurring roles in shows such as Law & Order: Criminal Intent, Boardwalk Empire and Masters of Sex. Dubious fact: Wikipedia and IMDb both claim she played the shaven-headed bookies agent in Guy Ritchie’s Snatch (2000)… but that can’t possibly be true, can it?

7) The sudden arrival of a ten-year-old daughter in Ally’s life, which irrevocably altered the show’s premise (#5.11, “A Kick in the Head”). Obviously I knew I’d be writing about this plot-twist for a blog post, so I listened carefully for an explanation as to how this wacky mix-up came to pass… and still don’t have the faintest idea how ‘Maddie’ came to be conceived. It’s like the show just skips a huge chunk of exposition: “So, one of your frozen eggs was mistakenly released – [mumble, mumble] – then her Dad died and here she is!” Eh? Did she even have a birth mother? No one ever mentions one… so we’re left to assume that the father fertilised that frozen egg and then nurtured the foetus all by himself somehow. Was he a wizard? Gah! To be fair, Hayden Panettiere was already an experienced child-actress by that point, and comes across as a very bright and likeable girl on-screen (not to mention being cute as a button!)… but I think you can forgive viewers for kicking back against such a clumsy and inexplicable character insertion, regardless of how adorable the mother-daughter bonding scenes were. 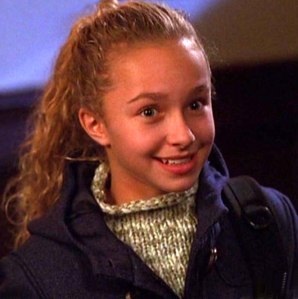 8) All of the 9/11 references. This season started airing in October of 2001, and clearly the tragedy was still weighing heavily on everybody’s hearts and minds. I’m not qualified to assess the emotional needs of the American public at the time, but I wonder if they might have preferred a little more escapism and fantasy, and less direct, explicit reminders of what occurred on that fateful day? In one episode (#5.12, “The New Day”) there’s actually a case involving a boss who lost two employees in the attacks being sued for subsequently firing a woman with AIDS… and lord only knows how bereaved viewers were expected to get through that morbid little bundle of misery! In the finale, John even presents Ally with a necklace bearing a charm designed to resemble the wreckage of the World Trade Centre as a going away present, which struck me as an incredibly tasteless gift… especially since she was about to get on a plane to fly to New York with her daughter! Oy.

[Apparently I had so much to say about this season, I’ll have to save the cameos for another post! So, to be continued…]