In my previous post I identified some of the major issues I had with the fifth and final season of Ally McBeal (2001)… and that turned into a bit of an epic, so I had to carry the laundry list of cameos over into a separate submission. Oy… 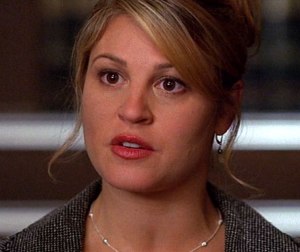 Anita Barone appeared in ep #5.4 (“Fear of Flirting”) as ‘Sarah Werner’, an aggrieved attorney who decided to sue Raymond for sexual harassment, after he, uh, straight-up sexually harassed her. Although the jury finds in her favour, it only awards her 75 cents in damages… while I was hoping the judge would have him barred from the show altogether! Roma Maffia also appeared as her semi-successful advocate, ‘Attorney Beckerwith’. Melinda McGraw appeared in ep #5.6 (“Lost and Found”) as ‘Nancy Gower’, a reformed con-woman/gold-digger looking to marry a new sugar-daddy, despite an express court order forbidding her from romancing men over 50-years-of-age! Jami Gertz returned in ep #5.8 (“Playing with Matches”) as uptight mummy’s-girl ‘Kimmy Bishop’, who was hoping to sue a professional matchmaker (Nell Carter) for declaring her terminally “unmatchable”. Romy Rosemont appeared in ep #5.10 (“One Hundred Tears”) as ‘Marie Hall’, the exasperated sister of a dying man who’s obsessed with breaking into their old childhood home, so that he can “fly” off the roof wearing home-made wings! In theory this could have been a very moving episode, but the final flight looked so fakey, with so much discontinuity between shots, that the intended emotional effect was fatally undercut.

Amy Pietz appeared in ep #5.11 (“A Kick in the Head”) as ‘Bonnie Boone’, Maddie’s unreliable aunt, who supposedly made a living singing snippets of TV show theme tunes in bars. M’kay. Technically Renée Elise Goldsberry debuted on the show back in ep #1.11 (“Silver Bells”), as one of three “Ikettes” singing back-up for mainstay Vonda Shepard… but it took until ep #5.13 (“Woman”) for her to earn a name and a real character moment, when she was called upon to lend her voice to Nelle (who was hoping to pass it off as her own). In all, Goldsberry appeared in forty-three episodes of the show as a backing singer… but has since gone on to play proper characters in shows such as The Following and The Good Wife, as well as earning the distinction of being the last actress to play ‘Mimi Marquez’ in the Broadway production of Rent (the final performance of which was filmed and released on DVD in 2008). Lily Mariye appeared in ep #5.14 (“Homecoming”) as the doctor handling Ally and Maddie’s DNA test… which should really have been done the day after the girl turned up on her doorstep, if you ask me! Jane Sibbett appeared in ep #5.15 (“Heart and Soul”) as ‘Beth Herman’, the obstructive aunt of a 16-year-old girl (Ashley Johnson) who desperately needed a healthy new heart… though the most compatible potential donor was the girl’s own father, who was serving a life sentence for murdering her mother (Beth’s sister)!

Heather Locklear appeared in ep #5.18 (“Tom Dooley”) as ‘Nicole Naples’, a proud bigamist hoping to avoid jail-time for her love-crime… though her case was rather undermined by ‘Tally Cupp’, a former college room-mate played by Lara Flynn Boyle, who rhapsodised on the stand about the sexy times they’d had together, back in the day. Vanessa Williams appeared in ep #5.19 (“Another One Bites the Dust”) as ‘Sheila Hunt’, an ex-partner of Victor’s, who sues him for breaching a contract they had, concerning the delivery of paintings for her gallery… and Cerina Vincent played ‘Penny’, the smiley server who handed him the summons. Kyra Sedgwick appeared in ep #5.21 (“All of Me”) as ‘Helen/Helena Greene’, a woman suffering from dual personalities… one of whom wants to divorce the other’s doting husband! They both hired the firm to represent them, with Ally and & John going head-to-head with Liza & Richard… and this penultimate episode (co-written by Peter MacNicol) actually turned out to be the strongest of the season! Finally, Courtney Thorne-Smith rocked up in the finale (#5.22, “Bygones”) as ‘Georgia Thomas’, to wish Ally a gently-mocking good-bye, look awesome in an uber-preppy ensemble, and remind everyone what an overlooked asset she was. Bless.

I also want to give a shout-out to Albert Hall, who played the perpetually sour-faced straight-man ‘Judge Seymore Walsh’, and suffered though all sorts of wackiness and sly insults over the years. His weary, withering disdain was an essential element of so many great scenes, both comedic and dramatic… so I’m glad his no-nonsense attitude never softened. I salute you, sir!