I found a 3-disc boxset of Farrelly Brothers flicks on sale in a charity shop for a pound, and thought I’d give them a spin for old time’s sake. First up is There’s Something About Mary (1998), starring Cameron Diaz as the eponymous dream-girl who unknowingly attracts the obsessive attention of several duplicitous suitors, as well as the true love of the movie’s punching-bag protagonist ‘Ted’, played by Ben Stiller.

Although the writing-directing duo of Bobby and Peter Farrelly are notorious for their gross-out humour, it’s clear from the commentary track that they took the romantic elements of this story very seriously, and were careful to ensure that Ted remained sympathetic throughout his trials and tribulations, so that he’d really earn Mary’s (and the audience’s) affections by the end of the movie. Oddly, the way he wins her heart by dropping out of the bitterly-fought “contest”, and reuniting her with a former boyfriend he believes she’ll be happiest with, has always stuck with me over the years… it’s such an incredibly sweet and noble gesture that it deserves to be celebrated, regardless of all the testicle-snags and misplaced-semen sight gags that preceded it. There are a lot of scenes and images here that make me wince or turn away in disgust… but I have to give the Brothers credit for allowing Ted his happy ending, after two hours of torture and humiliation!

Speaking of which, it would be easy to accuse the Farrellys of making fun of handicapped characters, but they seem quite sincere in their admiration for their own disabled friends… and even though there are several times when we’re asked to laugh at characters with mental and physical disabilities (some of which are being faked, to be fair),  the biggest losers here are really the able-bodied-but-immoral scumbags who try to play on the heroine’s sympathy and sweetness. Mary’s brother ‘Warren’ (W. Earl Brown) may be exploited as a source of discomfiting humour at times, but he’s also deeply loved and defended by his devoted family, and comes in for far less physical punishment and embarrassment than any of the other significant male characters.

But getting back to the ladies… Diaz gives a very winning performance as the much sought-after suitee, and looks suitably game and gorgeous throughout (aside from that bit with the spunky quiff, obviously). I find Lin Shaye’s look as Mary’s older room-mate ‘Magda’ quite repellent, but I guess that was the idea, so kudos to her for sitting through what must have been a pretty extensive make-up session before every appearance. Naturally my stand-out among the supporting cast has to be Sarah Silverman, playing Mary’s snarky gal-pal ‘Brenda’… which isn’t a very big role, but she gets to swear and pull some adorable faces, so I’m not complaining. Note: On the commentary track (which was recorded sometime around the turn of the century), the Farrellys are full of praise for Big S, and correctly predict that her star would soon be on the rise. Hurrah! 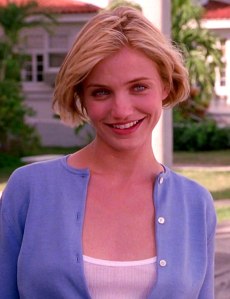 As for the fellas… the first time I saw this movie I was rather cold on Matt Dillon’s turn as a skeezy private eye who uses a long-range microphone to eavesdrop on Mary’s conversations to pick up dating tips and check his progress, because I kept thinking what a perfect role it would have been for Bruce Campbell… but this time around I could appreciate Dillon’s work on its own merits, and found him very funny indeed. Apparently the pencil-thin moustache was his own idea, so he gets a gold star for that too.

Mind-boggling fact: Not only was this unconventional rom-com a big hit with the critics, it also earned $369 million dollars at the global box office, from a budget of just $23 million! Yowsa…

A comic book writer with an interest in feminism, philosophy, and affirmative action.
View all posts by Dee CrowSeer →
This entry was posted in Rants about Films and tagged Cameron Diaz, Lin Shaye, Sarah Silverman, There's Something About Mary. Bookmark the permalink.