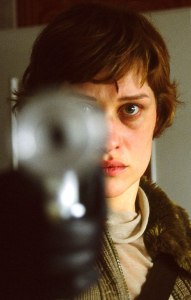 Ever since I watched The Pagan Queen, I’ve had a hankering to see more of Lea Mornar’s work, so when my Xmas money came in I took a chance on the French edition of Such Mich Nicht (aka La Dernière Cible or Don’t Look for Me) (2004), and was relieved to find that it boasted the original German dialogue track (as well as dubbed Français), along with English subtitles.

Unfortunately, the derivative storyline is dull as dishwater: Mornar plays ‘Anna’, a disaffected contract killer who’s grown tired of sleeping in dreary hotel rooms, playing prostitute dress-up, and shooting the few men she gets to spend any real “romantic” time with. So she’s looking to retire, but we all know how that goes… her “one last job” proves impossible, her boss turns against her, an innocent love interest gets dragged into the crossfire, yadda, yadda, yadda. I’m sure there are plenty ways to breathe new life into these clichés (Grosse Pointe Blank being a fine example), but here they’re simply trudged through in the most perfunctory and pared-down manner possible. Despite the occasional splash of red on-screen, it’s a totally bloodless affair… and the few “fights” that do break-out are awkwardly staged and undercooked, with no sound effects or dynamic cuts to suggest that the punches have made contact or done any damage at all.

That said, I’d still classify it as a “well-made” film, because it does hang together visually, and there are some solid performances from the cast… it’s just not very exciting or involving. The cinematic equivalent of a digestive biscuit… not bad, just a bit blah. On the plus side, it is a pretty great showcase for Mornar… she’s in almost every frame, and she earns that attention with a brave and committed performance, demonstrating her impressive range while slipping effortlessly from sociopathic killer to lovelorn lost-girl to perky ingénue. In a more exciting film, she could easily have become an action-chick icon… but sadly that accolade eludes her for now…

A comic book writer with an interest in feminism, philosophy, and affirmative action.
View all posts by Dee CrowSeer →
This entry was posted in Rants about Films and tagged Don't Look for Me, La Dernière Cible, Lea Mornar, Such Mich Nicht. Bookmark the permalink.
%d bloggers like this: