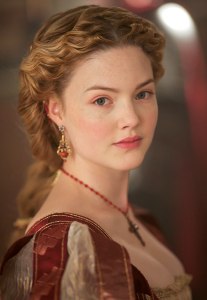 The second season of Neil Jordan’s The Borgias (2012) was a little longer than the first, but pretty much of a muchness. While “researching” this post, I stumbled on a wiki where some better-educated souls have listed the major historical inaccuracies in every episode… leading me to realise that the show is roughly 80% fiction and misinformation! Basically, Jordan seems to have taken the names and vague concepts of real historical figures, and then just made everything else up to suit himself! In fact, you’d probably find more educational content in an episode of Drunk History than this series! Nonetheless, it’s still highly entertaining period hokum… and very lovely to look at.

Sadly, ‘Lucrezia Borgia’s (Holliday Grainger) exquisite beauty and grace was little compensation for the dull turn her story took, as she spent most of the season either touring ruins as part of a committee to improve the city’s public facilities, or teasing and turning down potential suitors. A far cry from her carnage-averting charm-offensive in the previous season… although the episode where she attempted to assassinate her brother ‘Juan’ with a falling chandelier was quite good fun! Shame she missed. (ep #2.3) Oh, and her posing as a maid-servant in order to feel out (as it were) a future husband was quite sweet… and strangely sexy, despite them both keeping multiple layers of clothing on for their scenes together. (ep #2.10)

Meanwhile, the award for Feistiest Femme has to go to ‘Caterina Sforza’ (Gina McKee), who started off on a bit of downer, getting fooled along with the French King and their allies by the fake cannons that ‘Cesare Borgia’ had installed along Rome’s defensive walls (ep #2.3)… but when Cesare followed her back to her castle in Forli to make her “bend knee” before his father, she rebuffed him with admirable moxie, before making the man her sex-slave for several nights! (ep #2.5) Sadly, her inevitable answer was “Up yours, baby!” (or words to that effect), and so Cesar departed to relay the bad news to his papa… prompting the Pope to send Juan and the Papal Army to lay siege to Forli in his stead. (ep #2.7) Caterina remained unbowed and undefeated, even as Juan took it upon himself to kidnap her beloved son (while waving the white flag of truce, no less) and torture him in plain view of the castle ramparts. Her response was to hike up her skirts and display her undercarriage to the enemy, while defiantly proclaiming that she could produce another ten sons to replace the one she was losing, and that they would all seek revenge on the Borgias! How badass is that? Apparently that’s based on a real incident from Caterina’s life, although it was during a different battle, against a different child-snatcher. Either way, McKee delivered a stunning tour-de-force performance throughout the season – as a steely military leader, sardonic seductress, and grieving cousin/mother – and I’m genuinely shocked that she was didn’t receive any awards (or even nominations)  for her efforts. Boo to that!

As for the supporting cast: Jemima West debuted in ep #2.1 as ‘Vittoria’, an ambitious young girl who’d taken to disguising herself as a boy, in order to study as an apprentice artisan. I was amused to see that she’d chosen to keep her long blonde hair loosely folded up under a short brown wig, rather than simply cutting it off… presumably so that the other characters could keep freeing her hair to cascade down her shoulders, before they seduced her! Meh. She returned for a further three episodes, and kept getting outed… then she simply disappeared into the aether, after helping Cesar to engineer the whole fake-cannon jape. Was she killed off-screen to prevent her gabbing about the ruse? Or did she finally decide to get a real haircut and accidentally slit her own throat with the scissors? I guess we’ll never know. Melia Kreiling also appeared in the opening episode as ‘Bianca Gonzaga’, a substitute mistress (and nudey-bathing companion) for the Pope, while his regular squeeze was off on her hols. She was quickly despatched from his chambers when ‘Giulia Farnese’ (Lotte Verbeek) returned, only to show up a couple episodes later all gussied-up as the newly-minted wife of one of the many, many Sforza cousins! (ep #2.4) 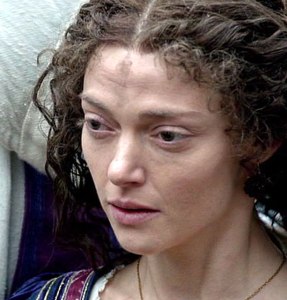 Sophie Thompson (aka Sophie C. Thompson) appeared in ep #2.5 as ‘Caterina’s Servant’, screaming “Murderer! Murderer!” at the fleeing Cesar, after discovering him stood over the bloody body of ‘Giovanni Sforza’ (aka Lucrezia’s abusive ex). Barbara Flynn also had a cameo as ‘Isabella’, the doting (and unsuspecting) mother of Cesare’s pet assassin. Camilla Rutherford appeared in ep #2.6 as ‘The Woman’, a penitent noble lady who volunteers to have her head shorn by an anti-Borgia preacher, in order to shed her sinful vanities. Caitlin Joseph appeared in ep #2.9 as ‘Elina’ (aka ‘The Dancing Girl’), an unfortunate innocent who gets raped and half-strangled by the syphilitic Juan, during a family celebration. He’s interrupted before he can finish this despicable act, but I was so worried about Elina’s condition I actually Googled “syphilis” to find out how contagious it is! Apparently, the answer is VERY… but for my own peace of mind, I choose to believe that they both still had their underwear on at the time (this show is too tasteful/timid to show actual nudity), and that she escaped unscathed and unsullied. So there.

Finally… well, this show has an annoying habit of giving names in the credits to characters who weren’t actually named in the episode itself, leaving me rather confused as to who they were… but based on their head-shots, I’m guessing that Matilda Sturridge appeared in ep #2.2 as ‘Alicia’, the inexplicably-pretty nun who escorted ex-cardinal (and suspiciously skilful knife-thrower) ‘Della Rovere’ on his wacky little road-trip to gain more supporters… and that Jacqui Dankworth (aka Jacqueline Dankworth) appeared in ep #2.5 as ‘Rosa’, the madam of a brothel who Lucrezia and her chums want to help them blackmail various corrupt cardinals (for charity!)