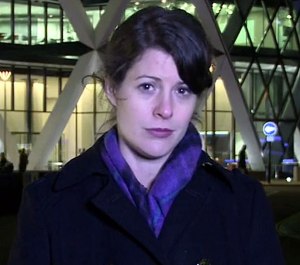 The third series of Charlie Brooker’s Weekly Wipe finished this week, with a partly-reconstituted sixth episode… and I was glad to see that this time around the eponymous snark-smith had recruited even more funny women to join the cast! Hurrah!

Morgana Robinson recurred in two different (male) guises, impersonating “truevolutionist” Russell Brand, and originating ‘Zeb’, a narcissistic teenage vlogger (but I repeat myself)… and the series was bookended with cameos by another critically-acclaimed character comic, Catriona Knox, who played both a studio floor manager squabbling with Brooker, and a “generic reporter” named ‘Emily Surname’ in a pastiche of recent economic coverage.

Great to have them aboard, and all that… but the show’s MVP undoubtedly remains Diane Morgan/‘Philomena Cunk’, with her wonderfully nonsensical reports and reviews. Bless.