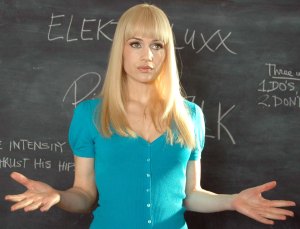 Like an idiot, I’ve been working through my movie watch-list in alphabetical (rather than chronological) order, which is how I ended up seeing Elektra Luxx (2010) before its predecessor, Women in Trouble (2009). Thankfully it isn’t too difficult to figure out who the characters are, or where they’re at in their lives, because… well, it’s not like a Lord of the Rings sequel, y’know? There’s no dense mythology or epic quests to wrap your head around… just a collection of loosely-connected vignettes and “shaggy dog” skits featuring a bunch of sweet, likeable characters, portrayed by an all-star cast. It’s a light-weight “hang out” flick, which makes for an amusing and entertaining time-passer, but not the sort of thing I’d rush out to buy on DVD… which is lucky, because it hasn’t actually been released in this country anyway. That said, I will be fast-tracking Women in Trouble, so I can spend some more quality time with these gals…

Carla Gugino stars as the eponymous ex-porn-star, who has taken early retirement after getting pregnant (presumably by her recently deceased rock-star boyfriend), and now teaches ladies how to have better sex, via classes at a local community centre. Her sincere efforts to transition into respectable motherhood are repeatedly wrinkled by a repentant stewardess (Marley Shelton) who was inadvertently responsible for her baby-daddy’s death… as well as various lusty men who can’t separate Elektra’s on-screen persona from her actuality as a human being. Gugino gives a gangbusters performance here… sexy, strong, sad, but always sympathetic… and even pulls double-duty as her character’s “identical” (but much harder-edged) twin ‘Celia’, who appears in a prison-visit flashback.

A secondary plotline features Adrianne Palicki and Emmanuelle Chriqui as a pair of vacationing porn actresses, who fall out over how to spend their evenings… largely because Palicki’s character, ‘Holly’, has an unspoken crush on her bestie, and doesn’t want to share her with the random business guys who are trying to pick them both up. Although I thought some of Holly’s malapropisms were pretty implausible (“Not the sharpest stool in the shed”, for example), Palicki was very funny in the role, and she shared a good rapport with Chriqui. Meanwhile, Malin Åkerman appeared as ‘Trixie’, an aspiring “internet pin-up” seeking career advice from a self-proclaimed connoisseur (and bedroom vlogger), played by Joseph Gordon-Levitt… Julianne Moore appeared as the ‘Virgin Mary’, in a dream sequence (?)… and Lucy Punch had a brief cameo as an eager-but-unlucky student in Elektra’s class.

Surprising fact: Writer/director Sebastian Gutierrez was also responsible for Rise: Blood Hunter (2007), which is pretty much the exact opposite of this movie… i.e., dark, generic, and dull as dishwater.