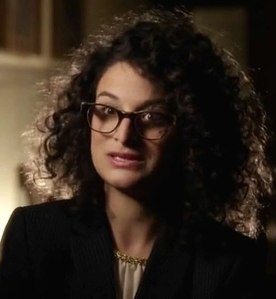 I didn’t find the third season of Kroll Show quite as final as the pre-publicity led me to expect… true, one of my fave characters (‘Dr. Armond’) did die in the penultimate episode, but then he came back as a ghost in the finale, with a slightly muddled brain and a whole new reality-show for us to enjoy! So, I was glad to read on The Atlantic website that Nick Kroll might well revive some of his creations for future projects, once he’s had a little time to recover. I doubt he’s taking requests, but I’d love to see ‘Ruth Diamond Phillips’ get a spin-off sitcom, featuring more of her hilarious courtroom cock-ups and dating disasters… and they’ve already got the perfect title for it with “Laws Of Attraction”! Sigh… I’m really going to miss my weekly fix of Jenny Slate… though I can still enjoy her vocal talents in occasional episodes of Bob’s Burgers. Aside from her recurring role as Tina’s classroom rival ‘Tammy’, she also voiced a socially-awkward magazine-subscription sales-girl in last week’s episode… she wasn’t credited, but her scenes helped to make it one of my fave eps of the season so far…

Meanwhile, Chelsea Peretti is still starring in the brilliant Brooklyn Nine-Nine… and I’m glad to see that they’ve toned down Gina’s criminality this time around, because that was really bugging me in the first season. They’ve also cast Sandra Bernhard as her mother, which seems like a perfect match to me. Last night I was watching Peretti’s very funny stand-up special, One of the Greats, and there were several moments where she seemed to be channelling Bernhard’s spirit, somehow… in her own unique way, I mean…

Oh, and Kroll Show also featured some subliminal advertising for Samantha Futerman’s documentary Twinsters*, via a very funny episode of “Wheels, Ontario” in which it’s revealed that Futerman’s character, ‘Tunes’, has an identical twin with a French accent (and terrorist tendencies)! Sacré bleu!

* Which is currently picking up a lot of positive buzz at the SXSW Film Festival.