“I Have A Human Vagina!” 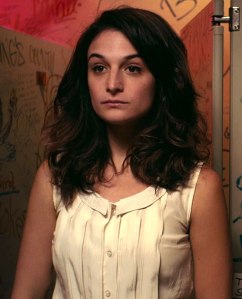 I was already a fan of Jenny Slate the sketch/character comic… and now, after watching Obvious Child (2014), I can also respect her as a dramatic actress too! This low-budget indie rom-com might not be to everyone’s tastes… both the “romance” and “comedy” are quite subdued, compared to more mainstream fare… and the plot largely revolves around the heroine deciding to have an abortion after a drunken one-night-stand… but it is a very moving and amusing experience, all the same. There were a couple times I thought things were going to get unbearably awkward, such as when Slate’s character ‘Donna’ got soused before a stand-up gig and started grieving about her (recently ex-ed) boyfriend cheating on her, but thankfully she (and by extension, the film itself) never lost her sense of humour, or her ability to entertain the audience. True, it probably wouldn’t have been the most hilarious set to sit through in person, but it was still a very engaging scene… and at least she had a supportive friend (Gabe Liedman) on hand to talk her down afterwards! 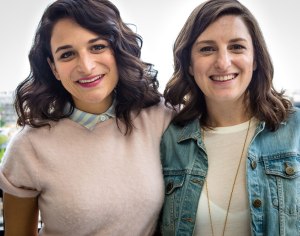 Slate absolutely shone in the lead role, bringing her trademark adorability to the script’s lighter moments, while plumbing serious depths in the darker moments… and never once losing your sympathy, despite some of the wrong-turns her character takes. I know it’s a cliché to say that someone’s performance in such-and-such was a “revelation”, but this film really did reveal a whole new aspect of Slate’s multifarious talent to me! I also have to give major snaps to Gillian Robespierre for drawing such a spectacular performance out of her leading-lady… especially since this was her first feature-length project as a writer/director (though they did both collaborate on an earlier, shorter version, with the same name)… so it’s a damn shame that the R2-DVD doesn’t come with any of the fancy extras (such as commentary track, “making of”, extended scenes, and original short) that the American version does. DAMMIT!!!

A comic book writer with an interest in feminism, philosophy, and affirmative action. He/him.
View all posts by Dee CrowSeer →
This entry was posted in Rants about Films, Rants about Stand-Up and tagged Gillian Robespierre, Jenny Slate, Obvious Child. Bookmark the permalink.

2 Responses to “I Have A Human Vagina!”