In With The Old 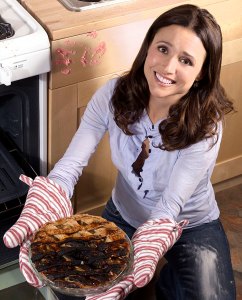 The New Adventures of Old Christine (2006 to 2010) wasn’t Julia Louis-Dreyfus’s first post-Seinfeld sitcom, but it was the one that stuck around the longest… and that’s about its only distinction, as far as I can see. Don’t get me wrong, I did find the show funny… quite frequently, in fact… but now that I’ve finished watching the first season, I can’t say I feel any great compulsion to leap into the second. JLD is best known (and beloved) for playing slightly cynical and callous characters in shows with an intellectual or satirical edge… whereas TNAoOC is much softer and fluffier, so its star never gets to unleash the full force of her fury on-screen. It’s a pleasant enough way to pass the time, but it’s just not as quotable or memorable as Veep* or Seinfeld, sadly.

Anyhoo, JLD plays ‘Christine Campbell’, a working mom who takes pride in her unusually amicable relationship with ex-hubby/baby-daddy ‘Richard’ (Clark Gregg), until he throws a spanner in the works by announcing that he’s started seriously dating a younger, blonder woman who also happens to be named ‘Christine’ (Emily Rutherfurd). Hence the show’s title. “Old Christine” has also just enrolled her young son ‘Ritchie’ (Trevor Gagnon) at a posh prep school, which brings her into contact with ‘Marly’ and ‘Lindsay’ (Tricia O’Kelley and Alex Kapp Horner), a pair of pampered “meanie-moms”, who look down their noses at everything she says and does, despite secretly envying her independence. Oh, and her slacker brother ‘Matthew’ (Hamish Linklater) lives in an annex of the house, serving as her babysitter when he isn’t making-out with a string of interchangeable dates. 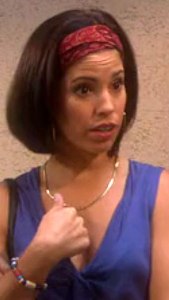 As for the supporting cast: Amy Farrington appeared as ‘Ali’, a delightfully gawky receptionist at the gym that Old Christine owns/manages… but sadly she was written out after the first two episodes, and vanished into thin air! Boo! Wanda Sykes appeared in three episodes (#1.3/6/10) as Old Christine’s “black friend”*, ‘Barbara “Barb” Baran’, and totally rocked her scenes… so I’m not surprised she was promoted to regular cast member status in subsequent seasons. Wendy Raquel Robinson appeared in ep #1.6 as ‘Anita Lawrence’, the female half of a couple that Old Christine impulsively decides to sponsor as applicant-parents to the prep school, solely because they happen to be African-American, and she’s desperate to make the place look more diverse. Jennifer Elise Cox appeared in ep #1.7 as ‘Natalie’, a rather needy “girlfriend” of Matthew’s. Nancy Lenehan appeared in ep #1.8 as ‘Kit’, a pricey party-planner… while Helen Slater played ‘Liz’, a lusty single-parent who seduced/recruited Matthew to be her manny/gigolo. Finally, Ana Ortiz appeared in ep #1.12 as ‘Belinda’, a housekeeper that Old Christine inadvertently befriended, after mistaking her for a like-minded parent… while Lauren Bowles played ‘Patty’, another member of the meanie-mom clique.

* Which returns for a new season on Sunday! Hurrah!!