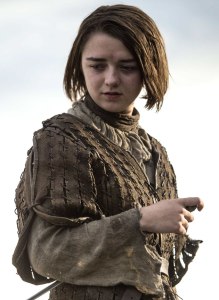 This morning I discovered that the first four episodes of the fifth season of Game of Thrones had been leaked to the internets… and while some might see that as cause for celebration, I’m afraid I can’t share their joy. The way I see it, the seasons are already far too short and the wait between them far too long, so watching four in one go just seems short-sighted and greedy… like gobbling up all your Easter eggs for breakfast, and then feeling sick for the rest of the day! You’re only hurting yourselves, kids!

That said, I did “unwrap” the first episode a day early, and can exclusively reveal (SLIGHT SPOILERS!) that it’s awesome… despite the total absence of Arya. The suggestion that Tyrion might be on his way to hang-out with Daenerys gave me a little nerd-gasm… though I’ve learned that it’s not always such a good idea for prominent characters to cross paths… I mean, it didn’t work out too well for Brienne and The Hound, did it?

A comic-book writer with an interest in philosophy, equality, and diversity. He/him.
View all posts by Dee CrowSeer →
This entry was posted in Rants about TV and tagged Game of Thrones. Bookmark the permalink.