I decided to buy myself the Kroll Show boxset, as an early b-day present… and am now very much grateful to myself for being so thoughtful! After reading some retrospective comments about the first season, I was expecting it to take a few episodes to build up a decent head of steam… but it really hit the ground running, imho. Of course, there are a few not-so-funny sketches scattered across the eight episodes, but overall the hit rate is so high (like 80-90%), and the presentation so pacey, they’re quickly forgotten amidst the ongoing onslaught of hilarity. Hurrah! It’s also fun to see the various characters evolving in isolation, before they all start crossing over and infecting each other’s comedy-streams… and this season really laid the groundwork for the mind-bending, genre-mashing genius to come…

Jenny Slate made her debut as ace publizicist (?) ‘Liz B.’ in ep #1.1, along with Sarah Dampf as long-suffering assistant ‘Cassandra’… and both returned for another three eps across the season. Not nearly enough, I know… but Slate did get a song-and-dance number in ep #1.4… and a scary ice-rink date with C-Czar in ep #1.7 (for which she also provided a DVD commentary), so there’s plenty opportunities for her to steal the show from its eponymous star here! Meanwhile, Samantha Futerman made her one and only appearance as ‘Tunes’ in the always-awesome “Wheels, Ontario”, along with Kathryn Hahn as ‘Mikey’s Mom’, and Anjulie (aka Anjulie Persaud) as ‘Baguitai’, a rather reckless student who snogged our hero in a broom closet, before smoking a “cannabis cigarette”. Plus, Tess Broussard debuted as ‘Shannon’, an eager San Diego Diet endorser, who then went on to date Dr. Armond in ep #1.5, and betray him in ep #1.6! As if that weren’t enough, Brie Larson had a cameo as a ‘College Girlfriend’ inexplicably reduced to trembling tears by an obnoxious mix-tape made by her home-town boyfriend, containing various not-so-subliminal instructions about how she should behave while she’s away. Aw…? 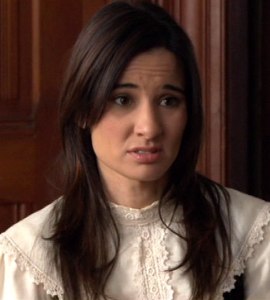 Chelsea Peretti made her debut as ‘Farley’ in ep #1.2, video-schmoozing with Bobby over the internets… before they’re rudely interrupted by his beloved Mom. Sadly it’s Peretti’s only onscreen appearance this season, but she did receive writing credits for seven of the episodes, so that’s something! Meanwhile, Jackie Debatin appeared as Dr Armond’s disgusted trophy-wife ‘Cece’, buying diamond-encrusted jewellery from her opportunistic gal-pal ‘Dina Bludd’ (June Diane Raphael)… and returned in ep #1.6, to get humped over a kitchen counter by C-Czar! Tonita Castro also made her first appearance as ‘Consuela’, the cheerfully indulgent maid of “Rich Dick” Wendy, who recurred in eps #1.4 and #1.7. Anjulie reappeared in ep #1.3 as ‘Lady DIY’, the token female singer inserted into a formerly-radical rap group by their new manager, as they sell out and devolve into harmless children’s entertainers. The same episode also saw Alison Becker playing a ‘Tour Guide’ whose haunted workplace is invaded by Bobby and his crew, while filming an episode of their “Ghost Bouncers” show… and Janet Varney playing the ‘Wife’ in a twisted commercial for a DIY-supplies chainstore named “Screws”, targeted at couples looking to install secret rooms in their homes for nefarious purposes. Eep!

Tara Subkoff had a cameo in ep #1.4 as ‘Tara Ess’, a “super-demanding” client who foolishly hired PubLIZity to promote her yoghurt-water drink… while Yvette Yates played a distressed young woman relying on a relentlessly wacky and insensitive radio call-in show for advice on how to handle her cheating boyfriend… and Jona Xiao played the female half of an entrepreneurial couple launching a surprisingly successful scam involving “digital money”. Maria Bamford appeared in ep #1.5 as ‘Denise Ryan’, a meek pug-owner/accidental-murder appearing on a confrontational talking-head show titled “Can I Finish?”… who then returned in ep #1.8 as the contestant on a pun-heavy show hosted by Dr. Armond, in which people are theoretically matched with their perfect pet dog. Ep #1.5 also featured Nandini Minocha as ‘Mrs. Sanghvi’, the exasperated landlady of pony-tailed “martial artist” who’s frittering his rent money away on a power-hungry habitat for a giant reptile named “Bruce Leezard”.

Megan Neuringer was introduced as ‘Dr Nussbaum’ in ep #1.6, attracting the lecherous attention of George & Gil, after a friendly game of basketball turns violent… Karen Black had a small cameo in ep #1.7 as ‘Sylvia’, an amorous guest at a party thrown by G&G, after they hire a “Declutter Specialist” (Tina Huang) to clean up their shared apartment… and Michaela Watkins appeared in ep #1.8 as the mother of a little girl whose birthday party is ruined by Ref Jeff, after he takes over his recently-deceased brother’s bouncy castle hire business, and attempts to share his grief with her family. 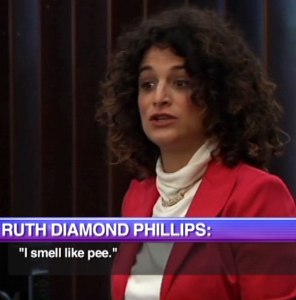 As for the DVD boxset itself… one of the “extra features” I was most excited about was the fact that every episode has optional English subtitles, which make it a lot easier to understand all the slangy dialogue and quick-fire gags that would normally fly straight past my ears. Yay! Besides that, the other treasure is a 26-minute-long collection of “uncut” footage from Dr Armond’s murder trial, which includes some fantastic schtick from Slate as compromised prosecutor ‘Ruth Diamond Phillips’, and a previously unseen cameo by Bamford as a “Pet Psychic” called to communicate with a puppy who could potentially exonerate the defendant! Very funny stuff… and it also makes Ruth’s decision to dress up in Shannon’s clothes a little more understandable, as she attempts to impersonate the beloved victim in an effort to unsettle Armond. It’s still grossly unprofessional of her, of course, but at least there’s a little more context here than there was in the edited version that aired on TV.