Season five of Game of Thrones went out swinging this week, with a surprisingly high number of prominent characters getting snuffed… or seemingly snuffed, anyway. This is a magickal Fantasy world we’re talking about, after all, and we’ve already seen that there are at least three methods of resurrection available… although so far only one has actually allowed the fallen to retain their previous personality and memories. Still, speculation about what might be coming in the next season would be pretty pointless at this stage… especially since many storylines have already seriously diverted from (or out-paced) their source material, and are now barrelling headlong into the unknown, with nothing but a few vague suggestions from the original author to keep them from careening off the tracks completely! Eep! Sadly, the finale also stomped on my misplaced hope that fave characters might be making some positive progress along their paths…

‘Arya’ (Maisie Williams) arrived in Braavos, and set about contacting the Faceless Men… and after a few knock-backs, she was accepted for training (sort of). Mostly this consisted of cleaning floors and washing dead bodies, but anyone who’s seen The Karate Kid knows that patience is the key when you’re trying to convince mysterious, taciturn types to teach you their kick-ass fighting skills. Unfortunately, she was still too invested in her own individual identity (and petty quest for vengeance), to fully embrace the “faceless” part of their modus operandi… and it was clear that her trademark feistiness would actively work against her in this context… though I was strangely relieved to see that she didn’t dump Needle in the drink along with her clothes. I’ve never felt so sentimental over a fictional sword before, but apparently it means a lot to the both of us! I also cheered a little when ‘Jaqen’ (Tom Wlaschiha) called her out on supposedly hating ‘The Hound’, while he was testing her capacity for deception… apparently the only person she was successfully lying to at that point was herself! Eventually she impressed her overseer by putting a pain-wracked girl out of her misery with a cup of poisonous well-water, served up with a little white lie, and earned herself entry to the temple’s secret chamber of creepy corpse-face-masks. Yay?

After being drilled on her cover story, Arya took on the guise (but not the visage) of an innocent clam-seller named ‘Lana’, and set off to find a suitable target for her first official assassination. Her attention was attracted by an unscrupulous insurance agent, who’d been cheating bereaved families out of their due… but before she could send him off to meet the Many-Faced God, she was distracted by the arrival of ‘Ser Meryn’ (Ian Beattie), the first name on her personal hit-list! She followed him in the most obvious way possible, letting him clearly see her several times… but thankfully he was too busy bitching about his boss and sizing-up prostitutes to recognise her as a Stark (or a threat). The scene where she infiltrated the brothel wearing a magickal disguise, and then took him down in the most painful and vindictive way she could think of, was pretty bad-ass… and there’s no doubt he deserved it, after all the punishment he’d meted out on her sister, among many others… but this dereliction of duty, and arrogant taking of an unsanctioned life, resulted in Arya being severely punished once she returned to the House of Black and White. Not only was her mentor revealed to be nothing more than a random stranger wearing a familiar death-mask, but she also ended up getting poisoned by proxy! Gah! Why did she have to lie to a man, and go off-mission? Girl has no brains!* 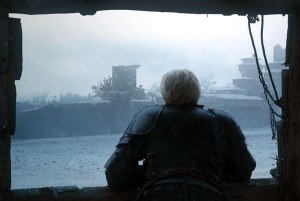 Meanwhile, ‘Brienne’ (Gwendoline Christie) was hot on the heels of the other Stark girl, ‘Sansa’ (Sophie Turner)… in the sense that she kept missing her en route, and failed to help her in any meaningful way when they did accidentally cross-paths. Even when “The Beauty” finally made contact with the imprisoned bride-to-be via an intermediary, her master-plan was for Sansa to light a candle in a window of the broken tower, if she was ever in trouble… assuming that the trouble she was in still allowed her to move freely around the castle collecting supplies, and that she still had enough fingers left on her hands to light the damn thing with, of course! Gah!! In the end Brienne also got distracted by a previous grudge, when ‘Stannis’ (Stephen Dillane) arrived with his severely-outnumbered army, and she rushed off to execute him in the name of her beloved patron, Renly. There was something quite satisfying about seeing her meting out some long-delayed “justice”, and getting closure on the whole shadow-with-his-face caper… but it didn’t really make up for the fact that she’d spent most of the season staring out of a window waiting for a poorly-thought-through signal that she then turned her back on at the crucial moment! GAH!!!

[Note: I have so much to say about this season, I’m having to ration out my ranting over multiple posts… oy vey!]

* VAGUELY REASSURING SPOILER: Apparently she doesn’t die from that poison in the books… but she does remain blind… so, that’s some comfort, I guess…?

A comic book writer with an interest in feminism, philosophy, and affirmative action.
View all posts by Dee CrowSeer →
This entry was posted in Rants about TV and tagged Arya Stark, Brienne of Tarth, Game of Thrones, Gwendoline Christie, Maisie Williams, Sansa Stark, Sophie Turner. Bookmark the permalink.

1 Response to Oathkeepers, Clams, And Cocks