My rant about the fifth season of Game of Thrones continues, with a couple more disappointments…

I was excited to learn that ‘Varys’ (Conleth Hill) was taking ‘Tyrion’ (Peter Dinklage) to meet ‘Daenerys’ (Emilia Clarke) in Meereen, and offer his services as an adviser to the beleaguered Queen… and the few scenes that “The Imp” and “The Mother of Dragons” shared together were just as glorious as I’d hoped, with them trading witty and impassioned political banter… but then they were ambushed by assassins during a stadium death-match, and Dany got airlifted out by the previously-AWOL Drogon (leaving everyone else behind/beneath her in the dust), before being dumped in the distant wilderness without a map or a compass to guide her home! It was just like one of those Bollywood movies where the lead couple are magickally separated and/or transported to the Swiss Alps, just as they’re about to kiss! Dammit! Still, it was nice to see ‘Missandei’ getting promoted to the Queen’s “small council”, to help run the city in her absence… because more screen-time for Nathalie Emmanuel is always appreciated! 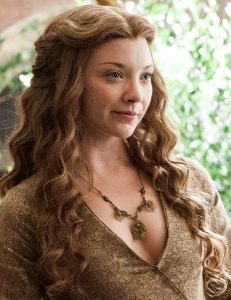 Meanwhile, back over the Narrow Sea, ‘Margaery’ (Natalie Dormer) finally achieved her long-held ambition to become Queen of the Seven Kingdoms (hurrah!)… only for her bitter mother-in-law, ‘Cersei’ (Lena Headey), to empower a rabid army of religious zealots to put the Tyrells on trial (boo!). I suspect Margaery would’ve made a rather good monarch, but she barely had a chance to digest her wedding cake and swap snarky comments with Cersei, before she was languishing away in a manky prison cell. Poor thing. Still, this did set-up the hilarious sequence where Cersei popped by to maliciously taunt her incarcerated “daughter”, only to be detained and thrown in a neighbouring cell, to be held accountable for her own sins! Oopsie! It’s hard to know if the queen-mother is seriously dim, or if the death/loss of so many loved ones has simply sent her into a self-destructive spiral… either way, she was well and truly hoisted by her petard there… or pecked by her own sparrow, as the case may be.* Seeing her painfully shawn and slut-shamed on a gruelling slog from the Sept to the Red Keep took a lot of the fun out of this comeuppance though, and made me feel unusually sympathetic towards her… so I was quite relieved when she finally made it home to friendly faces, and fell into the comforting arms of, um, the zombified corpse of a mountainous monster. Shudder. 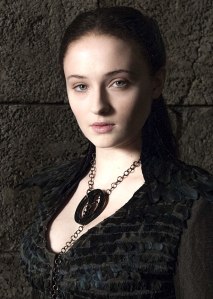 Speaking of monsters, ‘Sansa’s (Sophie Turner) treatment at the hands of ‘Ramsay’ (Iwan Rheon) was the final straw for many feminist bloggers, who announced that they would no longer be watching or recapping the series, after the horrors that transpired on the couple’s wedding night. In fact, there was a massive drop in the viewing figures after that episode (#5.6), though they steadily rose again over the second half of the season. Personally, I didn’t find the forced-consummation scene anywhere near as harrowing as ‘Theon’s (Alfie Allen) castration back in season three… but maybe that’s a gender thing? Apparently in the books, Ramsay marries a completely different woman and tortures/humiliates her in ways that would have been utterly unbroadcastable… so, while not excusing the way he treats Sansa here (because it’s entirely inexcusable and unforgivable), she did get off relatively lightly, compared to her literary equivalent.

I can understand why the show’s writers chose to substitute Sansa for an unknown newbie, and send her character back to Winterfell to give Turner some more meaty dramatic scenes to play… but it did seem a shame that after finally escaping Joffrey’s clutches, the girl was marched up the aisle alongside yet another sadistic psycho, and wasn’t able to use her hard-won experience to manoeuvre her way out of it. Meh. Admittedly, the bruised-but-unbowed Sansa did get a few sly digs in at Ramsay about being a bastard, but his casual reveal of the flayed corpse of an old woman she’d been colluding with did kinda wipe the smirk off her face there. As noted in my previous post, Brienne was bugger all use to her, so thank the Drowned God that Theon finally came to his senses and helped her escape… sort of… maybe… assuming she survived the landing…

Incidentally, there’s so much downtime between seasons, and so many supporting characters flitting across the screen, I didn’t realise that Ramsay’s mistress, ‘Myranda’ (Charlotte Hope), had actually appeared in several episodes over the previous two years, before scoring some more extensive scenes with Sansa here! I’d just assumed that Ramsay, as Myranda herself suggests, had access to a pool of women that he’d use and then dispose of when they started to “bore” him. The fact that she’d survived this long in his company with all her digits intact is quite a feat, really… though she pushed her luck (and “Reek”) a little too far in the end…