For Whom The Custard Bell Tolls 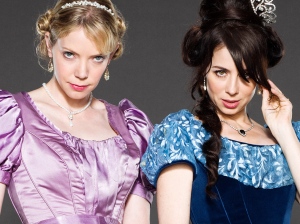 At one time or another I’m sure we’ve all wondered what would happen if someone smooshed The Real Housewives of Wherever together with Upstairs Downstairs… right? Well, wonder no longer, dear reader, because Natasha Leggero and Riki Lindhome have kindly provided us with the answer to that weighty conundrum! Another Period, which debuted on Comedy Central this week, is a period reality-show parody, starring Leggero and Lindhome as spoiled-rotten sisters belonging to a ridiculously-rich family in Newport, Rhode Island. All of the characters, from the lowliest servants to the snobbiest nobs, seem to be harbouring dark soapy secrets and/or long-simmering grudges, and the pilot is stuffed with secret affairs, incestuous snogging, homoerotic bathing, old-timey drug abuse, casual class-based bullying, random stabbings, and hysterical screaming. Fun! This show’s probably not for everyone, because a lot of the jokes were quite distasteful, while others were just plain silly… but it really hit the sweet-spot for me, and I’m really looking forward to seeing what the rest of the season has to offer. 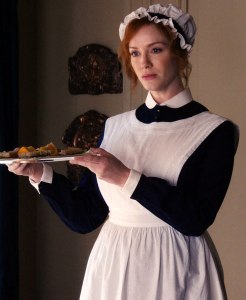 Aside from a fun premise and hilarious scripts, the show also boasts an all-star cast, with Paget Brewster and David Koechner playing the leads’ pampering parents, Artemis Pebdani as their resentful “asymmetrical” sister, Michael Ian Black as a pompous head-butler, Beth Dover as an unstable housemaid, and Christina Hendricks as a cynical new addition to the staff. According to an interview with Leggero and Lindhome at Co.Create, all of the characters were written with their eventual actors in mind, and Hendricks is a particularly interesting choice because she really commits to her role as a serious and sane outsider/observer stranded in a sea of madness… which just makes everyone else’s childish nonsense even funnier!

Guest stars in the pilot episode included Thomas Lennon as the posturing ‘Marquis de Sainsbury’, Kate Flannery as ‘Annie Sullivan’, and Shoshannah Stern as ‘Helen Keller’. Normally, I might disapprove of misrepresenting real-life historical figures in such a disrespectful way… especially when they’re as admirable and blameless as Sullivan and Keller were… but I was laughing so hard at the “cocaine-wine”-fuelled carnage that I forgot to frown! Oops.

1 Response to For Whom The Custard Bell Tolls