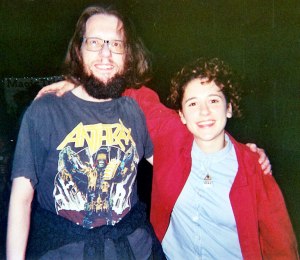 Here, if proof be need be, is a photo of me and the adorable Ellie Kendrick at Bournemouth Film & Comic Con, Saturday before last. After reading a couple blog posts about proper convention etiquette, I’d like to reiterate that she initiated the physical contact, not me… in fact, her elbow was already cocked to put an arm around me while I was still shrugging off my shoulder-bag! I didn’t even have time to straighten my glasses, dammit!

I also took some snaps of the Game of Thrones talk, but they didn’t come out so well… I mean, you could see the heads of the people sat in front of me okay, but the stage was too dark and blurry to make out the guests. Pesky.

Note: I was wearing my “vintage”* Anthrax/Judge Death T-shirt in honour of John Wagner, who created the character… coincidentally, he had copies of the new Dark Justice book for sale (and signing) on his table, so it felt pretty appropriate!

* Only a smidge older than Ellie herself, actually!