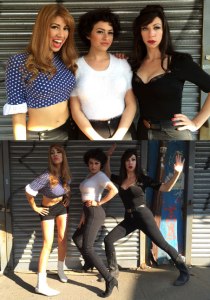 I try not to get too excited about movies/shows that haven’t been released (or even finished) yet, but my pulse-rate did rise a little when I read a recent GQ interview with Stephanie Beatriz and she mentioned being cast in Pee Wee’s Big Holiday: “So there’s a girl gang. I can’t tell you too much… It’s myself and Jessica Pohly and Alia Shawkat. We look exactly like the girls from Faster, Pussycat! Kill! Kill!. My character is probably insane and definitely bloodthirsty. She’s whackadoo.” Swoon! Sadly, she doesn’t say whether it’s just a one-scene cameo, or a more significant role, but IMDb does list stunt doubles for their characters, so that’s pretty promising… either way, I want to go to there.

[Photos stolen from Pee-Wee Herman’s official online “Log”… apparently they were posted back in May, so I’m really lagging behind here…]